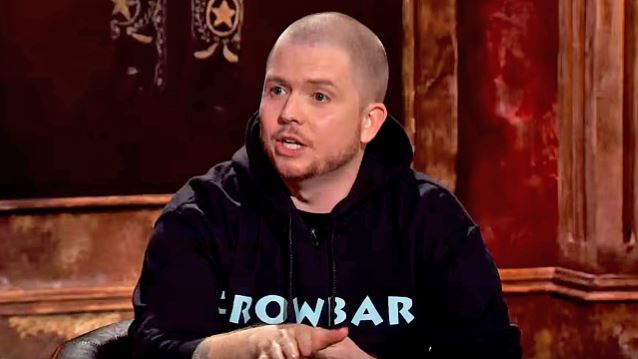 HATEBREED frontman Jamey Jasta says that he is "not jumping out of his seat" at the prospect of Axl Rose singing for AC/DC, explaining that he would be more excited if someone like ACCEPT's Mark Tornillo stepped in to replace Brian Johnson.

The legendary Australian hard rock band postponed the last ten dates of its recent North American tour after doctors told Johnson he faced "total hearing loss." Evidence has mounted that AC/DC may use GUNS N' ROSES singer Axl Rose as a "guest vocalist" when it reschedules the shows, with Johnson possibly not returning to the band at all.

Asked by Australia's Sticks For Stones web site if he would go watch Axl singing for AC/DC, and whether he thinks they are a good match, Jasta said (hear audio below): "Yeah, I'll check it out. I really… I wanna say that I wish Brian Johnson the best. I've been going to the ear, nose and throat doctor since, like, 2010, and I'm due for another checkup."

He continued: "I think it's kind of every singer's worst fear — singer, screamer, broadcaster… anybody… voiceover talent… Anybody who's doing anything where their business and their livelihood is their voice, it's always in the back of your head. So I really hope he makes a full recovery, I hope he's okay, and I hope that the drama and the clickbait and the stuff that we're seeing online, I hope it's not as bad as what it seems."

Jasta went on to say: "As far as Axl singing for AC/DC, it doesn't have the excitement as, like, if a Mark Tornillo or… somebody who is more of an underdog, I think, I would be more excited about. I don't know… Like, I would have liked to see a rags-to-riches type of story rather than a bunch of millionaires, you know, kind of doing AC/DC covers. I don't know... I respect Axl, I like his voice, I think his voice will be fine for AC/DC songs. I wanna check it out. But I'm not, like, jumping out of my seat. If you told me Mark from ACCEPT got the gig, I would be losing my mind. I would be so freaking happy, 'cause I love those… I love the last three ACCEPT records; they're fucking great! But I like an underdog story."

AC/DC postponed the last ten dates of its recent North American tour due to Johnson's condition, promising to make them up and possibly use "guest vocalists."

The band reportedly began meeting with potential guest singers in Atlanta, during which Rose was also spotted in the city.

Also not known is the official position of GUNS N' ROSES on Axl's possible stint with AC/DC. Three-fifths of the classic GUNS lineup — Axl, Slash and Duff McKagan — reunited for a show in Hollywood on Friday and is set to play more six concerts this month and a North American tour later this year.