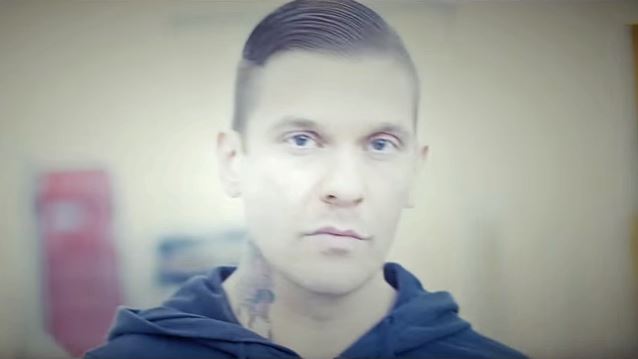 During a brand new interview with the WGRD radio station in Grand Rapids, Michigan, SHINEDOWN frontman Brent Smith was asked for his opinion on last week's announcement that Brian Johnson was retiring from AC/DC because he risks substantial hearing loss if he continues to perform in large arenas and stadiums.

Smith said: "I was a little confused by the whole situation until the other day, because Brian Johnson actually released a statement yesterday, where he had made a point about the fact that his hearing loss was something of really just… It's quite tragic on a lot of different levels. You know, he's been with AC/DC for 36 years. But in his statement… I think a lot of people, before Brian made his statement, people were just really angry at Angus [Young, AC/DC guitarist], like, 'What are you doing?' And I understood that, because of the iconic voice that is Brian Johnson. But I didn't really know what was going on."

He continued: "I was saying this before, when it happened…. We don't really know what's going on; it's not like I have an open line of communication with the band AC/DC. And everybody was just making their own assumptions as to whether they thought this was B.S. or it was bogus, or what was going on. But from what I gathered from Brian Johnson's statement, he's okay with what they're doing by bringing Axl [Rose, GUNS N' ROSES singer] in to finish up the dates. And also, he thanked Cliff [Williams, AC/DC statement] and he thanked Angus in the statement. And it basically came down to the fact that the doctors are, like… The hearing loss…. He can't perform in stadiums anymore right now. He can't deal with just the amount of noise that larger arenas and stadiums impact on his hearing. It doesn't mean that he can't go into the studio and perform, is what he said in the statement. So I think he's gonna continue to do albums with AC/DC, and hopefully, God willing, he may be able to return to the stage. I mean, he's 68 yeas old. But it's kind of one of those things where only time will tell."

Smith went on to say: "But, in answer to your question, what do I think about it? After looking and reading his statement, and seeing what they're doing by bringing Axl in to finish up the shows, now that I know both sides, and it looked as if Brian Johnson had given his blessing for Axl to come in and do this, I mean, more power to 'em, I guess."

AC/DC's European stadium tour will kick off May 7 in Lisbon, Portugal, and run through June 12 in Aarhus, Denmark. Following the European run, Rose will head out on tour with his GUNS N' ROSES bandmates for the "Not In This Lifetime" summer stadium tour.

AC/DC postponed the last ten dates of its recent North American tour after doctors told Johnson he faced "total hearing loss." Those dates will be rescheduled, also with Rose on vocals. Details will be released soon, the band said in a statement.

SHINEDOWN's fifth studio album, "Threat To Survival", debuted at No. 6 on The Billboard 200 album chart, selling 65,000 copies in its first week of release.

"Threat To Survival" is the third SHINEDOWN album to enter the chart in the Top 10, following "Amaryllis" and 2008's "The Sound Of Madness", which debuted at No. 8.