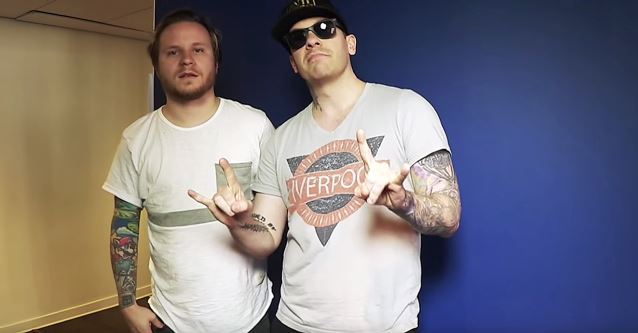 Brent Smith and Zach Myers of SHINEDOWN spoke to RockSverige.se on August 20, which would have been late PANTERA guitarist "Dimebag" Darrell Abbott's 49th birthday. Check out the clip below.

Speaking about Dimebag, Brent said: "The first time we ever met him, we were sharing a dressing room that just happened to be a trailer. It was a big, big, sixty-thousand-plus-capacity festival there. I heard these boots coming up, stomping up the steps. There was a door in between the two rooms. He knocked the door down and he walked, and he was, like, 'There's not gonna be any of this separation. If we're in the same room, then we're a family. So you boys get on over here and getcha pull.' Which, what 'getcha pull' meant was, 'have a drink with me.'"

He continued: "He embodied life. Like, 'You're here. Live it.' [He was] probably one of the last great guitar heroes."

Recalling the day that Dimebag died, Myers said: "To me, it was the moment on tour when the world stopped for a second. You realize how fragile life is.

"When it happened to him, it was just the worst, because a guy who loved everybody and never said an unkind word about anyone. That's who it happened to, and it made you question a lot of things."