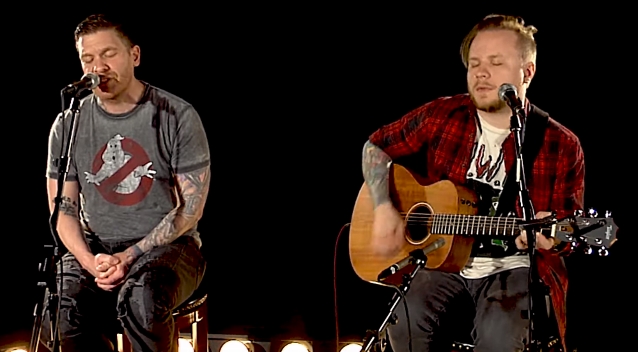 Brent Smith and Zach Myers of SHINEDOWN recently performed a short acoustic set at Studio 64 at iRockRadio.com in Farmington, Connecticut. Check out video footage below.

"Attention Attention", SHINEDOWN's sixth studio album, debuted at No. 1 on the Top Rock Albums chart back in May 2018. The follow-up to 2015's "Threat To Survival" marked SHINEDOWN's first full-length effort to be produced entirely by Eric Bass. The 14-song release that tells the story of a character who starts out defeated and slowly overcomes pain and personal struggles and becomes confident at the end. The album also lyrically touches upon Smith's former drug addiction and Bass's depression.