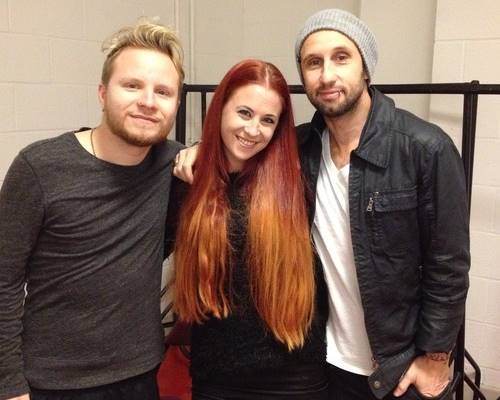 Miss Rach of U.K.'s TeamRock Radio recently conducted an interview with SHINEDOWN before the band's October 22 concert in Manchester, England. You can now listen to the chat using SoundCloud widget below.

SHINEDOWN's fourth album, "Amaryllis", was released last year. The CD debuted atop Billboard's "Rock Albums" chart and at #4 overall on The Billboard 200 — SHINEDOWN's biggest chart debut thus far — with over 105,000 units sold its first week out.

"Amaryllis" arrived in stores almost four years after the band issued "The Sound Of Madness". SHINEDOWN frontman Brent Smith told The Pulse Of Radio that even though the band really came together on that last effort, they didn't want to rest on their laurels while making "Amaryllis". "We're never really a band that's gonna ever be satisfied," he said. "We're never gonna be complacent with 'Oh, well, that'll do.' We're the band that's looking for the doors that everyone is afraid to find, because we like that. We like pushing the envelope constantly. It keeps us on our toes."

The release of "Amaryllis" was accompanied by an e-book called "For Your Sake: Inside The Making Of Amaryllis", a 75-page, "completely interactive" e-book that contains commentary, photos, video footage and other content exclusively chronicling the creation of the new record.