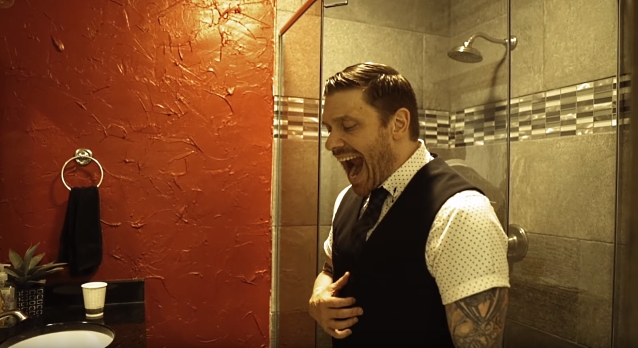 SHINEDOWN singer Brent Smith has shared a video of his vocal warm-up routine from the road. The clip, which was shot inside the bathroom of the band's "warm-up room" during SHINEDOWN's current North American headlining tour, can be seen below.

Smith says in the video: "20 years of touring professionally, and people always ask me what do I do with my voice as far as warming up to go out and perform. [It] depends on how long I'm gonna be onstage. These shows are an hour and a half long, so I'm not gonna spend 20 minutes warming up. So I really just do a couple of things. I just start by loosening up all the muscles in my face — yes, you have a lot of muscles in your face. So it looks silly, it sounds silly, but it's very effective, and you don't have to do it for very long. You just kind of go up and down. And you can watch me do it. This is all I do."

Back in 2015, Smith revealed that he developed vocal problems which contributed to a delay in recording the band's fifth studio album, "Threat To Survival". Smith explained that his throat was ailing after 21 months of touring for 2012's "Amaryllis", telling Full Metal Jackie: "When we got off tour, I had three nodules on my left vocal cord. I had to heal them. I was lucky enough to do so naturally — I didn't have surgery, but it took two and a half months to get them where they needed to be."

On top of the nodules, Smith developed another illness, explaining: "I got this thing called thrush, which is normally what babies will get. We have fungus in our bodies that's dormant and sometimes it'll unleash, and it unleashed on me. It went all the way down to my esophagus, so that was another two months to heal from that. Four months in all after we got off the road, then we started writing the record."

SHINEDOWN's latest album, "Attention Attention", came out last year. The disc debuted at No. 5 on the Billboard 200 album chart back in May 2018.

The band is on the road for the summer leg of its 2019 world tour, which will hit Reno, Nevada on July 24 with support from BADFLOWER, DINOSAUR PILE-UP and BROKEN HANDS.