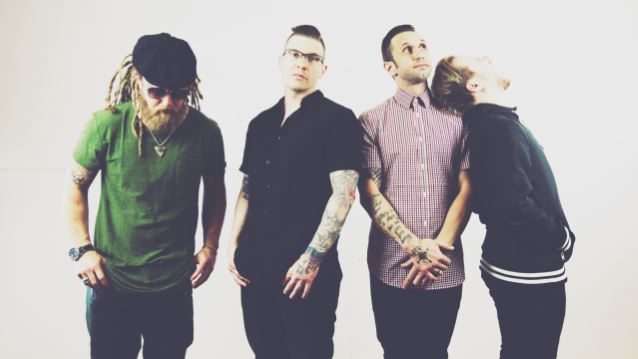 The official "short film" for the new SHINEDOWN song "Asking For It" can be seen below. The track is taken from the band's fifth studio album, "Threat To Survival", which debuted at No. 6 on The Billboard 200 album chart, selling 65,000 copies in its first week of release.

Commented SHINEDOWN singer Brent Smith: "There are many elements that go into making a SHINEDOWN video. So what we decided to do on the latest installment in the SHINEDOWN catalogue was have as much fun as possible.

"The video for 'Asking For It'‬ is more of a skit/short than a music video.

"Working with longtime friend and director Darren Doane is always an adventure.

"We collectively wanted to do something completely original and different for us and our audience. With the help of our management at In De Goot Entertainment and our esteemed record company, Atlantic Records, we feel that we've done just that..."

Brent previously told the WGRD radio station about "Asking For It": "It's a unique track on the record because it was the very first song that was written for what came to be 'Threat To Survival', and normally during the writing process, we'll write a lot of songs before we go in to record what the album is going to be — anywhere from between forty and upwards of sixty songs sometimes. 'Asking For It' just kind of held on through the all of the other sessions. It always felt like the opening song to the record, and it is the opening song to the album.

"As far as subject matter, it's pretty straight forward: be careful of the toes that you step on in life, because they may be the attached to the ass that you have to kiss later on. It just means be careful how you treat people, basically, and don't be a jerk.

"As far as sonically, it's a very classic punk rock style song. I kind of borrowed a little bit from CHEAP TRICK and Billy Joel…"

"Threat To Survival" was the third SHINEDOWN album to enter the chart in the Top 10, following "Amaryllis" and 2008's "The Sound Of Madness", which debuted at No. 8.