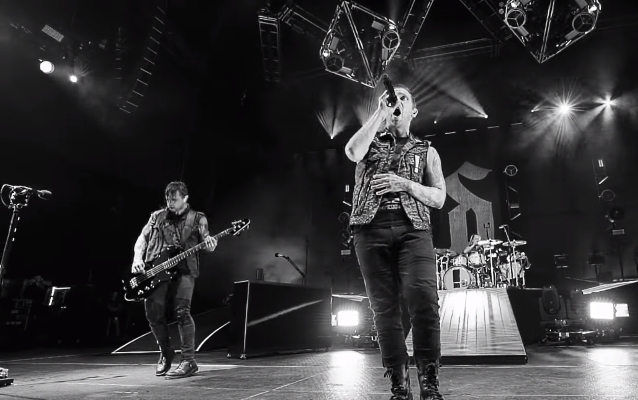 SHINEDOWN has released a new music video for its anthemic single "Get Up", a collection of behind-the-scenes moments on tour and live footage from the road that gives an inside look into the powerful moments that the song is fostering between the bandmembers and their fans.

The uplifting No. 1 Active Rock and Top 25 Alternative hit, which was heard during the Super Bowl pregame show, has amassed more than 27 million total streams, galvanizing listeners around the globe with its offer of hope, empathy and encouragement in the face of personal struggles, whatever they may be. The powerful song speaks to the human spirit in a time of need, something that front man Brent Smith is deeply connected to after battling his own personal demons.

"Get Up" became a light in the darkness, born out of Brent watching his friend, SHINEDOWN bassist Eric Bass, deal with clinical depression. When Brent put pen to paper, a beautiful, universal song rooted in Brent and Eric's raw vulnerability took shape. Reaching far beyond any genre or label, "Get Up" quickly began resonating, soundtracking "Today" show's look back at 2018, breaking a new record for SHINEDOWN by giving the band the most Rock Airplay Top 10s ever and their 13th No. 1 on Billboard's Mainstream Rock Songs chart (the second most in the history of the chart, tied with VAN HALEN), and becoming a fan favorite at arena shows on tour where the crowd response is palpable.

"Attention Attention", SHINEDOWN's sixth studio album, debuted at No. 1 on the Top Rock Albums chart back in May 2018. The follow-up to 2015's "Threat To Survival" marked SHINEDOWN's first full-length effort to be produced entirely by Eric Bass. The 14-song release that tells the story of a character who starts out defeated and slowly overcomes pain and personal struggles and becomes confident at the end. The album also lyrically touches upon Smith's former drug addiction and Bass's depression.