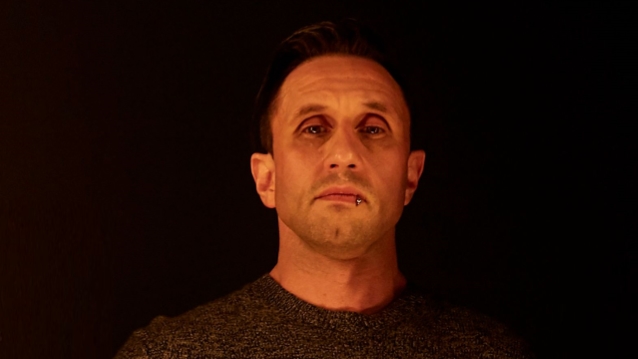 SHINEDOWN bassist Eric Bass recently spoke with Ethan Jackson of the Topeka, Kansas radio station V100. The full conversation can be seen below. A few excerpts follow (as transcribed by BLABBERMOUTH.NET).

On the current American leg of the band's ongoing "Attention Attention" tour:

Eric: "Almost every show's sold out. It's been very humbling [and] extremely enjoyable, because we're out with our friends in ASKING ALEXANDRIA and PAPA ROACH. Despite what bands will usually tell you — 'Oh, we're having a great time. We love those guys' — there's certain bands you don't get along with. This is the opposite of that. These are some of my favorite people in the business, and we have great camaraderie and we all have a genuine respect and love for each other, which is awesome. We're having a great time, and I think that permeates the show. All the bands are in a great place... We have huge production — some of the biggest production we've [ever] brought — and [we're getting] great reviews of the shows. I don't think things could be much better."

On the response to the "Attention Attention" album:

Eric: "[It's been] phenomenal, and once again humbling. Brent [Smith, vocalist] and I, even when we were writing it, we were looking at each other thinking we had something pretty special. Any record, you always know you have good songs, but this one seemed like it had a little more glue to it, a little more stuff. We had this special feeling about it while we were writing it and then when we were making it. We were hoping the reaction would be what it's been. The fans really, really dig it. The only thought in my head while I was making the record was not fan service, because I think that's kind of a bad term, but really putting all the love and work into it that we could to give our fans something really, really special that I thought they would love. You never know — when you throw the bird out of nest, you never know what's going to happen. Is it going to die a horrible death at the bottom of the tree, or is it going to fly? I don't think it died a horrible death, so we're good."

On producing the album himself:

Eric: "I'd done individual songs before — I'd done 'Cut The Cord' and 'Diamond Eyes', and I did our acoustic iTunes sessions and a couple other things for some soundtracks, but never a full record. I'm a giant hypocrite because I always said that bands should never produce themselves, because the opinion is really important — an outside ear — and bands have a tendency to turn into spaceships when they produce themselves. Sometimes, bands can get too self-serving, and it becomes about making some musical statement and you forget what you got you where you are. I was very cognizant of those things while making it. I was never nervous — the guys had my back; we had a great time; the label had my back; there was never any intrusion, interference, anything like that. We were really fortunate to be able to just go away and make 'Attention Attention' and really pour our whole selves into it. Brent and I were talking yesterday on the bus about how this is the first record that he's ever written that there's not a single lyric he would change on it... It was a labor of love. I didn't take a single day off from September 18 until January 22. I worked Christmas Day; I worked New Year's Day. Anything worth doing is worth going all the way for. It was awesome, and now I've given myself panic attacks thinking about making another one, maybe. We're a good year off from even writing, but still, it's like, 'Oh my god — I've got to do this again at some point.'"

On the band's hit single "Get Up", the lyrics for which discuss his ongoing struggles with depression:

Eric: "I had the music and melody for that on my phone since about 2016. I'll save things — I'm constantly recording ideas, melodies and music stuff... I have a certain folder I put all that stuff in, and that was in there. It was one I was really excited about working on melodically. I thought it was really good. Brent and I started putting that song together, and the lyrics didn't come very quickly. We were four or five days into lyrics, and usually, we're done writing lyrics for a song in two or three days. The spark of the idea has come from Brent usually. He's got to sing it; he's got to deliver it. He'll come up with the initial idea, and I basically start throwing things into the pot once the idea's there lyrically, but the seed has to come from him. He was, like, 'I just don't have anything.' I was at the point where [I said], 'Let's move on to something else. Let's write something else,' and he was like, 'Well, hang on — I actually do sort of have something.' It was super personal, but he was apprehensive to bring it to me because it was about myself and my depression issues and anxiety, and how sometimes I won't leave the house for days. I just have a really, really hard time. He sang me the verse — he had the verse and half [of] a pre-chorus, and we had the 'Get up, get up' thing from just shooting melodies around with each other when we were writing it. We always knew that was going to be there, [but] we didn't know what it meant. He sang me this thing — he's, like, 'I wrote this about you.' It was very sweet. That actually made it okay to write the rest of the record. We weren't too far into writing at that point, and it was, like, 'Let's just put all of our garbage out there, and all of our issues.' We always write from a personal place — we always write what we know — but you'll sometimes project that onto other characters when you're writing. Self-ownership is a hard thing when it comes to demons, so we just decided to take the plunge and really go down that road. 'Get Up' was a very, very special song, and it has shown itself to be extremely special to a lot of people... To have written something that's helping people with their issues by bringing to light my issues is pretty amazing. That's what this band is about – that's what we're built for. We're built to help people through rock n' roll music."

"Attention Attention", SHINEDOWN's sixth studio album, debuted at No. 1 on the Top Rock Albums chart in May 2018.