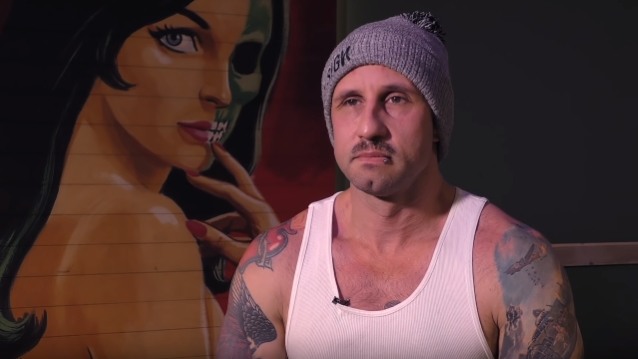 SHINEDOWN bassist Eric Bass has revealed that "Attention Attention" is the first album he and his bandmates have written sober. The follow-up to 2015's "Threat To Survival" lyrically touches upon singer Brent Smith's former drug addiction and Bass's depression.

"[There was] no drugs, no alcohol for any of us," Eric told Holland's FaceCulture (see video below). "I know Brent, it's well documented, his struggles. But writing, that cloud sometimes helps creativity. But he and I talked about the fact that… I used to go into writing sessions after having taken some hydrocodone or something, 'cause it took the edge off or whatever. It was ridiculous, now that I think about it. It's that fear of not succeeding. So he and I talked, going into this, about how everything we need is inside of us, everything he needs for his lyrics is inside of him, everything I need for music and melody is inside of me. And so we did — we wrote this thing sober. But in that, it took a longer time sometimes. Sometimes some of these songs, the lyrics wouldn't happen overnight; it was kind of a struggle, or a re-edit, or a re-write, or whatever."

"Attention Attention" marks SHINEDOWN's first full-length effort to be produced entirely by Bass. The 14-track album, SHINEDOWN's most raw and personal to date, is a mental, emotional and physical journey that follows an individual from life's lowest lows to the highest highs as anxieties dissipate and demons disappear.

Asked if he thinks the making of "Attention Attention" brought him and his bandmates closer together, Eric said: "Our band gets closer and closer every day, man. I know people probably think it's corny; people who watch this interview thinks it's contrived, but it's not. I often wonder if bands we tour with think that we're putting on a show for 'em. 'Cause we walk around and we're always happy and we all hang out with each other, we work out together, we eat dinner together, we eat lunch together. We genuinely love each other, man — we genuinely care for each other. And we wanna see each other succeed in our personal lives, we wanna see ourselves succeed in our professional life; our families are a family. It's not contrived. It's not put on. It's just how we are. And we have our differences and our arguments, just like anybody else. We always say when there's just three of us together, we're always talking about the one that's not there. I know what the conversations are when I'm in there; I just wonder what they're saying about me when I'm not around. But that's just healthy — it's what happens — and no one gets uptight about it."

He added: "I don't know if the record brought our band closer together, but the experiences that the record is about is really what makes us close. We're just telling the story of that. And who knows, man? Right now we're probably living the stories we're gonna be telling later."

"Attention Attention" debuted at No. 1 on the Top Rock Albums chart back in May.