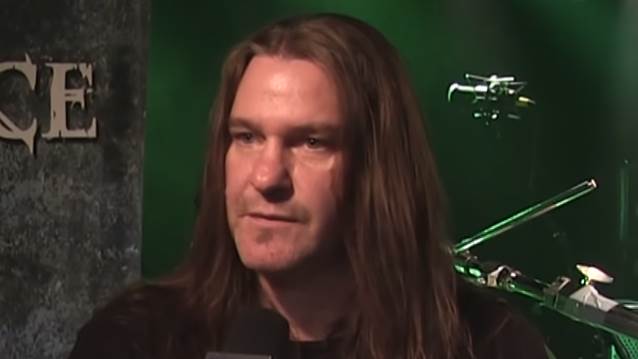 Jimmy Kay of Canada's The Metal Voice conducted an interview with former MEGADETH and current ACT OF DEFIANCE drummer Shawn Drover prior to the band's July 15 concert at Petit Campus in Montreal, Quebec, Canada as the support act for ARMORED SAINT. You can watch the entire chat below. A few excerpts follow (transcribed by BLABBERMOUTH.NET).

On what he learned from being in MEGADETH that he's applied to ACT OF DEFIANCE:

Shawn: "Punctuality, for one. No, I learned a lot of things. Overall, just try to be a professional musician. When we're headlining, be courteous to the support bands. When we're a support band, make sure we start and finish on time. There's so many things. Right off the top of my head, just represent yourself in a professional manner out here. This is not a game out here. We're out here trying to better our career. Doing things and going over your stage time and not caring what the headliner's people tell you and stuff, that's recipe for not being invited on another tour. I've been around the block a couple of times. I've always been an apt pupil and learned a lot of things in MEGADETH and try to be as professional as I can in every aspect."

On what he learned musically from MEGADETH that he brought into ACT OF DEFIANCE:

Shawn: "I didn't take a whole lot musically and try to emulate it in ACT OF DEFIANCE at all. I had the EIDOLON band before I joined MEGADETH. We'd already written six records and I wrote most of that music. So, to me, it was business as usual when we wrote music for ACT OF DEFIANCE, the songs that I've written for this band, it's business as usual for me. In a musical sense, I never took anything away from that where I'm going to copy this and I'm going to copy Dave's [Mustaine] style or whatever. It's nothing to do with that at all. I've always done things my own way musically. That was a different band and Dave wrote most of the music in that band, of course, and it was great to play those songs and to play to the stuff in the repertoire, the classic tracks and all that stuff they did over the years, that was a lot of fun, but it was a different role. That was playing a lot of music to the drummers who previously done it, so that was a whole different ball of wax, but it was great fun. This is great fun in a different way."

On whether he was the catalyst for getting bassist David Ellefson back into MEGADETH in 2010:

Shawn: "Long story short, we had a situation where we're going to go on the 20th anniversary [tour] for 'Rust In Peace' and we were without a bass player. James [LoMenzo] was let go at the time. It was, like, 'Okay, we need to find a bass player.' I was, like, 'If we're going to do that tour, it would be smart for the band to try to get David back.' Even it was for just for that tour. That was the mindset I took with that is I contacted David and said, 'Hey, what do you think about possibly coming onboard to do this tour?' It was just an American tour at the time for a month. He was open to it and I presented it to Dave. They haggled out all that stuff they had in the past — it was none of my business. A day later, he was down in the studio rehearsing, so it worked out. So, yes, it was me."

On whether he's proud of MEGADETH's 2013 "Super Collider" album, which received lukewarm reception thanks to its commercial sound and less technical songs:

Shawn: "That's subjective. I've got nothing bad to say about anything with those guys. It was a different kind of musical avenue, perhaps. I'm always an advocate of the heavier stuff. It's not a secret — anyone who knows me knows I like the heavier stuff, but I like all kinds of music. It wasn't as well-received as the other records, but it is what it is. Yeah, I don't really have anything bad to say about it. It's not my favorite record, but it doesn't mean I hate it either, but it's not my favorite record."

On how his relationship with guitarist Chris Broderick has grown from their time together in MEGADETH to ACT OF DEFIANCE:

Shawn: "Look, we all hung out. Myself and my brother [Glen] got Chris into the band. When my brother quit the band, we got Chris's information and Glen told management, 'Look, contact Chris Broderick, he can do the job. He lives in L.A. now. He fits the bill certainly.' The next day, I think it was, Chris was down talking to management and Dave, if I recall. It was a real quick turnover, which was good. But, yeah, Glen, I was part of that, too, getting Chris Broderick into the band. Yeah, it worked out really well."

On breaking through in the metal scene as a then-relatively unknown Canadian musician:

Shawn: "There's no secret, man. Glen got a phone call, Glen got an e-mail about joining MEGADETH and then, I got the call to join the band six days before the tour started. Lightning struck twice for myself and my brother. As it turns out, I stuck it out for the long haul, a lot longer than Glen did. Glen was happier, at the end of the day, he was happier doing studio work and stuff, so he opted to do that. I've been doing this for a long time. I like being on the road and creating music and all that stuff. If there was a secret, I'd write the book and sell a million copies."