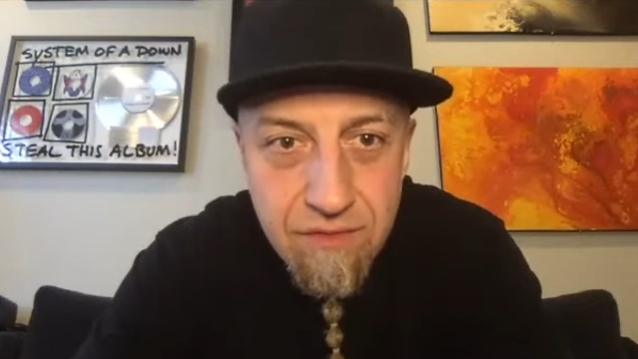 During an appearance on MACHINE HEAD frontman Robb Flynn's "No Fuckin' Regrets With Robb Flynn" podcast, SYSTEM OF A DOWN bassist Shavo Odadjian spoke about his band's inability to record a full-length follow-up to its "Mezmerize" and "Hypnotize" LPs, which came out in 2005.

The Serj Tankian-fronted outfit has toured intermittently since ending its hiatus in 2011, but has only managed to record two songs in the last 15 years, "Protect The Land" and "Genocidal Humanoidz". Released last November, the tracks were motivated by the recently erupted conflict between Artsakh and Azerbaijan, with all proceeds supporting humanitarian efforts in SYSTEM OF A DOWN's ancestral homeland of Armenia. Along with other donations from fans on their social pages, they have raised over $600,000 so far.

Discussing the overwhelmingly positive reaction to "Protect The Land" and "Genocidal Humanoidz", Shavo said (see video below): "To me, this is all bittersweet, because I think we can still do it, but because of misunderstandings [between] bandmembers, we're not doing it. Look at us — we have a common cause. We get together, we do two songs, two videos.

"I'm that member that still everyone is like the best friend of mine, but they're not best friends with each other so much," he explained. "They are, but they have differences in opinions and stuff. I have a way of understanding each member and saying, 'Dude, we can overcome this.' It's not that big of a deal — no one fucking banged anyone's wife; no one did any of those things that can really destroy a relationship. It's just a difference in opinion of things. And I think people should be [able to] work it out. But because, I think, of what we had, I think it's, like, some people are stuck in what we had and some people wanna move forward and not do what we had and do something totally different, which is wrong too. I don't think we should do something totally different; I think we should do something that both agree [on]. And we're having a hard time [agreeing on a direction], and that's where we are.

"So, to me, it's bittersweet, because I see everybody, and everyone's, like, 'We love Shavo.' And I'm, like, 'I love you,' but then they can't work together."

Shavo went on to reiterate his belief that the differences between the SYSTEM members are not insurmountable. "I don't think anything so horrible has happened," he said. "We're all alive. We're all friends. I swear, when there's conversations going on, it's very legit, very loving. No one's hating on each other. They're very polite towards each other. Serj and Daron [Malakian, guitar/vocals], when they talk, they're connected, they're nice to each other. No one's hating, no one's cussing, no one's saying 'fuck you', no one's saying 'you ruined…', 'you did this.' It's just that section that's fucked up.

"Daron brought these songs in," Shavo said, referring to "Protect The Land" and "Genocidal Humanoidz". "And we've worked that way before. A song like 'War?' was brought in by Daron — that was a Daron song; Daron brought that in, and that happened. And then there's a song like 'Sugar', where I brought that in. And there's a song like 'Question!' where Serj brought it [in]. So we have different ways of writing songs, [and] it should be like that again. But because of what's happened, I feel like it's kind of like become this big issue now.

"I think at the end of things, when we're old and gray, we're gonna look back and be, like, 'Fuck, we were idiots,' for not taking the time and seizing the day. I believe in seizing the day in everything I do, and that's what I do — that's why I'm so busy nowadays.

"Like I said, I'm telling you here, there's nothing that's happened that can't be worked out. So I always have hope. I'm doing everything knowing that SYSTEM's not dead, and it hasn't been dead."

"Personally and outside of the band, everybody gets along reasonably well. There is no hate for each other in SYSTEM OF A DOWN. We're like a family. A lot of people think, 'Oh, Serj and Daron don't get along!' and no, that's not true. Serj and Daron get along just fine. But Serj and Daron, or Shavo and Serj, different people in the band will have a different idea of how they want the band to move forward. That's kinda where our disagreements are at."