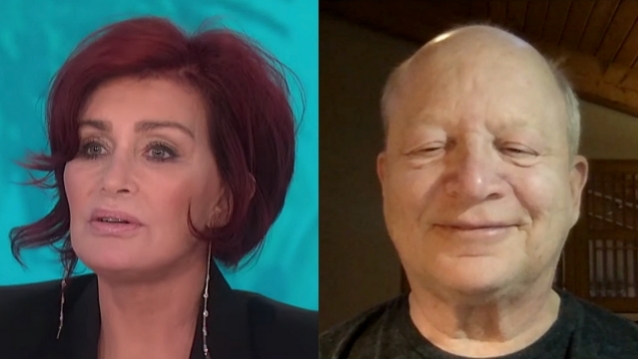 Sharon Osbourne has slammed music blogger Bob Lefsetz as a brown-noser after he accused Ozzy Osbourne of becoming "so overexposed with story as opposed to music, he's become a cartoon character."

Lefsetz, author of the Lefsetz Letter, praised Ozzy's new single, "Under The Graveyard", in a November 13 blog post, saying: "What kind of crazy fucked-up world do we live in where Ozzy Osbourne releases his best new track in eons and no one knows?" He added: "One in which Ozzy has become so overexposed with story as opposed to music he's become a cartoon character, and one in which culture washes over you in a tsunami to the point where nothing is important, to where everything can be ignored or marginalized, despite the hype machine."

Bob went on to say that the last great work Ozzy did was almost 30 years ago with "No More Tears", insisting that the singer has "missed the target" since guitarist Zakk Wylde has been gone from Ozzy's band.

Lefsetz also made the assertion that "BLACK SABBATH became even bigger in the decades after Ozzy left," explaining that "people finally understood it."

After Sharon read Bob's comments, she wrote him an e-mail, which he has since posted to his web site. "You've been pretty disrespectful whenever you've mentioned [Ozzy] in the past," she wrote. "In the past when you have tried to write about British music from the 70s, 80s & 90s you've always got it wrong … As for Ozzy and BLACK SABBATH, you don't understand the music, you don't understand the culture and now are only writing about Ozzy now to try and be hip because you've heard his new album is going to be a landmark album for him."

Sharon also took issue with Bob's claim that Ozzy hasn't made great albums without Zakk, explaining that "since joining the band in 1986, Zakk has always played on every album Ozzy has released. Ozzy has not released an album in 10 years. You state 'since Zakk's gone.' Where's he gone? I just spoke to him yesterday. Do you know something I don't?

"There have only ever been two tours that Zakk has not played with Ozzy," she continued. "That was in 1995 when he was working on his own solo project and was signed to Geffen. Then again in 2007, when Zakk was headlining his own tour. So, in 33 years working with Ozzy he's only ever missed two tours. Zakk was just 18 when he joined Ozzy, he is now 52 years of age. We've seen him grow from a boy into a man. The Zakk Wylde family is now part of our family."

Sharon also blasted Bob's contention that BLACK SABBATH became bigger in the decades after Ozzy left, saying that "after Ronnie Dio replaced Ozzy in the band they had two hit studio albums and one live album. Their relationship was short lived. After Dio left SABBATH they had a constant stream of replacement singers. At best, they may have sold (and I'm being generous here) 5 million albums worldwide. Their popularity waned and they ended up opening up on tours and headlining small clubs worldwide. Meanwhile, Ozzy has sold 65 Million albums throughout his solo career and headlined sold out arenas. In fact, in 40 years Ozzy has never played anything smaller than an arena and has continued to headline festivals all over the world since he went solo, a lifetime ago in 1979."

She went on to call Lefsetz a "typical LA brown nose that wants to get on a bandwagon" and told him, "Keep writing about the people in LA whose asses you are so far up your eyes are brown." She added, "If you mention millennials one more fucking time I'm going to puke!"

Firing back at Sharon, Bob wrote in a new blog post: "Sharon, you self-hating meeskite. No good deed goes unpunished. My policy is not to respond to wankers, but I know if I don't print your e-mail you'll post it elsewhere to rile me up, to get publicity. Furthermore, I usually let people have their say, but not you, I won't be bullied by you like MTV and everybody else who's ever been involved with you.

"Kudos for not only making Ozzy a solo star, but yourself in the process, reaping rewards for you and your family, especially financially, after intentionally failing to sign the MTV contract so when the show was a hit, you could hold up the network for beaucoup bucks.

"Your screed below is just a ploy for publicity. Ozzy puts out a new track and there are crickets, people don't even know he's on the Post Malone album, so you want to get in a war with me to make it a big story, maybe even appear on those execrable daily talk shows you go on that feature words but little meaning, never mind influence."

He also defended his BLACK SABBATH comments, saying that he wrote that "BLACK SABBATH became even bigger in the decades after Ozzy left" because people "realized how great the original BLACK SABBATH records" were "after the crass, phony conglomerations fronted by others to less and less appeal."