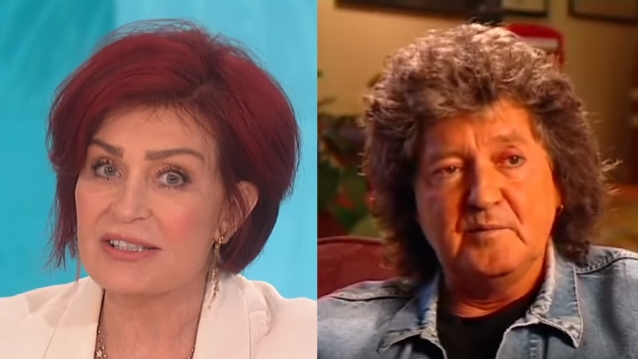 Sharon Osbourne has slammed Bob Daisley as a "sad old fuck" who "can't get over the fact" that he was fired from Ozzy Osbourne's solo band.

Daisley, who played bass on the first two Ozzy solo albums, sued the Osbournes several times over unpaid performance royalties. Daisley continues to get paid his songwriting royalties for the songs he wrote on Ozzy's "Blizzard Of Ozz" album and the follow-up, "Diary Of A Madman".

Sharon spoke about Bob's involvement in her husband's career during a recent wide-ranging interview with Celebrity Access Encore.

Asked if Ozzy's first post-BLACK SABBATH album was initially intended as a band project, Sharon responded: "Never, never, never. The bass player, Bob Daisley, has said that over the years. He's a sad old fuck that played on two of the greatest albums in the [rock] genre, and he can't get over the fact that we didn't use him further. Like it was, 'Goodbye. See ya.' And he's never gotten over it. And several lawsuits later — he tried to sue us three times — each time thrown out of court. Thrown out of court three times. He's tried to change history, and it just won't fit. It was never a band. There's no way. It was Ozzy Osbourne."

Sharon also talked about her decision to remove the playing of Daisley and drummer Lee Kerslake from the 2002 reissues of "Blizzard Of Ozz" and "Diary Of A Madman", replacing the original recordings with tracks from Ozzy's then-current bassist and drummer, Robert Trujillo and Mike Bordin, respectively. Admitting that she is a "mean bitch," Sharon said the tracks were re-recorded with new players "just to teach [Bob] a lesson."

According to Sharon, when she and Ozzy and were putting together his first solo band, they were in Los Angeles first, and then in England. "We started off in L.A. yeah. That is where Ozzy found Randy [Rhoads]. Couldn't find a bass player or a drummer. Bob Daisley had been working with Jet Records for awhile with WIDOWMAKER. He was like a session player. If you look up Bob Daisley's list of credits, I think he was in about 12 different bands because he was a session player. So my brother said, 'Well, we've worked with Bob. Why don't you try him because he's a good bass player?' And he is and was a good bass player. So we said, 'All right, we will try him.' Then when we couldn't find a drummer, Bob said, 'I have a mate, Lee Kerslake, looking for a gig' and that's how Lee Kerslake played on the first two records as well."

Sharon's latest comments come just nine months after she and Ozzy announced that Daisley had re-signed his U.S. publishing to their Blizzard Music Limited company after the 35-year reversion period. This new agreement encompasses songs co-written by Daisley from the first two Ozzy solo albums, which remain under the full control of Blizzard Music Limited worldwide.

Daisley has repeatedly said in interviews and in his memoir, "For Facts Sake", that he, Kerslake and guitarist Randy Rhoads were initially led to believe they would be part of a band called BLIZZARD OF OZZ, with Ozzy as the group's lead singer.

More recently, Daisley said that he harbored no ill feelings towards Ozzy.

"I don't burn bridges — I don't hate people," he told The Metal Voice in early 2018, when asked if he would work with Ozzy again. "If there was a way to do it where we could work something out in a sort of nice way, I wouldn't say it's completely out of the question. It's a possibility, I suppose, depending on the circumstances on how they sell and offer it."

Daisley's most recent lawsuit against Ozzy over unpaid royalties was dismissed in May 2017. U.S. District Judge Christina Snyder concluded at the time that Daisley's claims that Osbourne used a sham company, Blizzard Music Limited, to withhold royalty income from him were matters that should be settled through arbitration.

Daisley told journalist Joel Gausten in a 2016 interview that while he had received performance and publishing royalties for the songs, he had not received his share of what are known as synchronization fees, or "sync fees," which writers earn from the use of a song in an ad, TV show, movie, video game or other such media.

He also explained in 2016 that Ozzy's publishing company had "been taking a higher percentage off the top" than his contract states, claiming, "The Osbournes have been taking 25 percent rather than the 10 percent I agreed to."

"We understand that Mr. Daisley is now in retirement and that these funds are his main source of income, so it is his right to be diligent with his money, but after 36 years, this is tantamount to harassment," the Osbournes said. "We would have hoped that after 36 years that Mr. Daisley would have lost his unhealthy personal obsession and resentment towards Mr. Osbourne's success."

This was not the first time that Daisley took legal action against the singer. Daisley and Kerslake, who also played on both records, filed suit against Ozzy in the early 2000s for unpaid performance royalties. Their suit was dismissed in 2002.