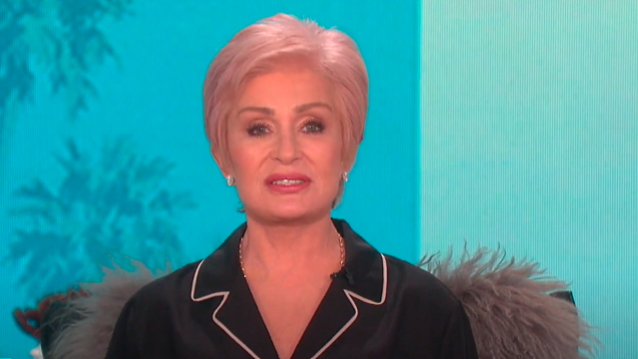 She said (see video below): "I was lucky enough to know him. I've been following his career for so long — since before they even got signed. VAN HALEN used to have a residency at the Whiskey on Sunset. Once a week, I used to go and see him. Just an amazing, amazing band, Eddie and his brother — just phenomenal. But Ozzy knew him much better, obviously, being a fellow musician, and they toured the world together. VAN HALEN's first big tour was supporting BLACK SABBATH, and they went around the world with SABBATH.

"When they were in England, touring England, Ozzy took them to his local pub," she recalled. "And the pub was in the middle of the countryside where Ozzy lived, and it was full of farmers and local people. And he took them into the pub, and, of course, they didn't understand what anybody said. I can only imagine their thoughts. They must have been, like, 'Are we in 'The Twilight Zone'?' Young guys from Pasadena, in L.A., going to this old English pub in the middle of nowhere. But Eddie was always funny and nice.

"This one story I'll tell you quickly," Sharon continued. "VAN HALEN and Ozzy were on a festival in Germany. And in those days, you always would stay in the same hotel and we all were in the bar late. And Eddie and Ozzy were drinking up a storm and just telling jokes, one to one, being really funny. Suddenly, [VAN HALEN singer] David Lee Roth came in... and he's doing his kicks and singing and shaking his hair around, and another kick. And it's, like, 'Who are you doing this for? 'Cause nobody's here.' Anyway, cut a long story short, he really got on our nerves. And Ozzy got a pair of scissors, and every time he'd fly his hair around, Ozzy would go snip, snip, snip. And in the end, Eddie goes, 'Oh no, man. That's enough. That's enough."

She added: "He has done so much for music. But we have his music — it will live on forever. And just love to his family."

Eddie died on Tuesday (October 6) at St. John's Hospital in Santa Monica, California. His wife, Janie, was by his side, along with his son, Wolfgang, and Alex, Eddie's brother and VAN HALEN drummer.