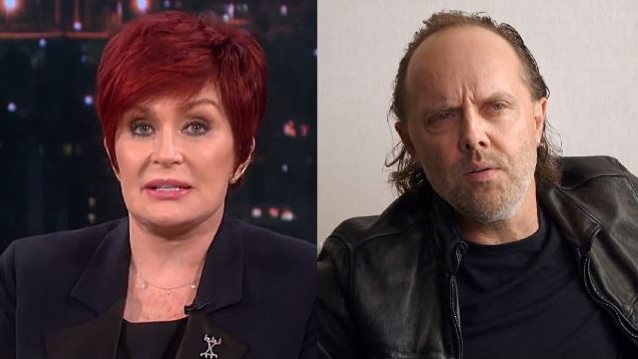 Ozzy and Sharon Osbourne recently took over Ozzy's Boneyard channel on SiriusXM satellite radio to play songs from their definitive list of "Ultimate Guitar Gods". Before playing the METALLICA song "Battery", Sharon said: "I feel like we're their parents. We've known them from when they were so young, and seeing them all grow up, have their own families… And since Robert [Trujillo, former OZZY OSBOURNE and current METALLICA bassist], who is, like… he is part of the Osbourne family. [Since] Robert Trujillo joined them, we're even more connected with them. It's family. You know, they are family. And [we have] so much respect for METALLICA. And [I] just personally love each and every one of 'em."

She added: "[METALLICA drummer] Lars [Ulrich] is a bit of a bigmouth — he needs a good slap sometimes — but we love him."

METALLICA toured as an opening act for Ozzy in 1986 while supporting its breakthrough album, "Master Of Puppets".

Back in 2008, Ulrich stated about Osbourne: "In 1986, Ozzy gave us our first break by taking us out on tour here in America, so whenever we get the call to play or hang together, of course, our response is, 'Fuck yeah! Just tell us when and where, and we'll be there."

Speaking to MTV, Trujillo said about leaving Ozzy's band to join METALLICA: "I was ecstatic about being offered the [METALLICA] job. But at the same time, in the back of my mind, there were also those feelings for Ozzy and Sharon that are so strong because they've been so important to me all these years. I have so much respect for them and they've changed my life. So as soon as I got into L.A. I called Sharon and we met later that evening and it was pretty emotional. About three or four days after that, Ozzy called me and gave me his blessings and he was very positive. He said, 'You've done well by me, lad. You've got my blessings. I'm not mad at you, Rob. You've been great, you're one of the best bass players I've ever had."