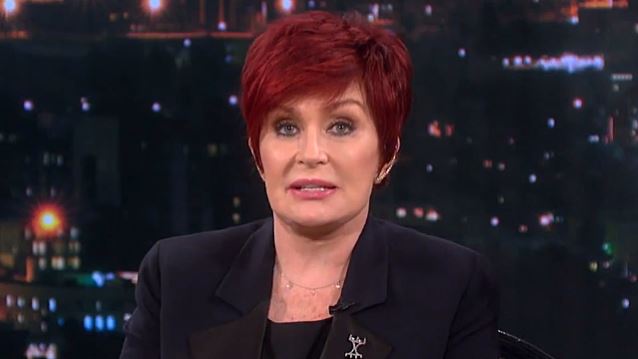 Ozzy Osbourne's wife and manager Sharon says that she felt "terrible" when she had a chance encounter with U2 only weeks after she slammed the Irish rockers for teaming with Apple to put the band's new album, "Songs Of Innocence", on every single iTunes account in the world for free regardless of whether it was wanted or not.

Back in September of last year, Sharon criticized U2 for giving their music away, writing on Twitter, "This is an invasion of my private space. My entertainment space." She also said: "U2, you are business moguls, not musicians anymore. No wonder you have to give your mediocre music away for free 'cause no one wants to buy it."

She continued: "Whose political ass are we going to pull you out of today? Or are you front row at another tragic fashion show?"

Sharon then slammed Apple itself and former Universal exec and Beats Music co-founder Jimmy Iovine, posting, "Jimmy Iovine, iTunes, U2, you're a bunch of megalomaniacs. FUCK YOU!"

During last night's (Monday, January 12) "after-dark edition" of "The Talk", her CBS talk show, Sharon addressed the U2 controversy, explaining: "I've been caught badmouthing so many people — so many people — and one which was so humbling was… I did it on the show… I badmouthed U2 for giving their album away at Apple free. And it wasn't personal; it was business, and it was how I felt about it business-wise, but I was very scathing with my remarks. And two weeks later, we were in England at the MTV Awards, and Ozzy was getting an award, and we were walking down to the stage, and there was this tunnel under the stage — very narrow — and coming towards Ozzy and I were U2, all four of them. And I'm, like, 'Oh, no. Here it goes. They are gonna lay into me.' And they were so lovely. They hugged and kissed me. They hugged Ozzy. And then when Ozzy finished doing his part of the show, he went back to the dressing room, and they'd written him a letter and they'd all signed it. What a classy act!"

She added: "[I felt] terrible. But I did try to explain to them, 'It isn't personal. This is just business. I don't wish you any harm. You're all good people. But this is just the business end.' But it's hard."

While nearly 40 million of the world's 500 million iTunes users accessed the U2 album, there have been complaints about it as well. Apple gave an online tutorial on how to remove it, while BUCKCHERRY guitarist Keith Nelson dissed the Irish supergroup for devaluing their own music.

In a September 2014 radio interview, U2 singer Bono responded to Sharon Osbourne's Twitter rant. "I can't believe she didn't take the high road. What a shocker," Bono cracked.

A retail version of "Songs Of Innocence" was made available last October.