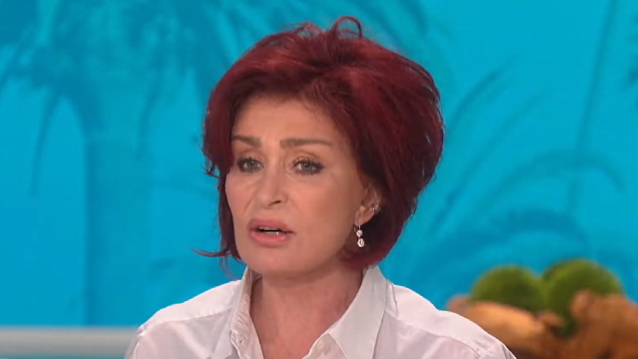 Sharon Osbourne has blasted tabloid reports about her husband Ozzy's ailing health, with the National Enquirer claiming he "will be dead by Christmas" and Radar Online saying he is "on a crazy train to an early death."

Sharon addressed the headlines during today's episode of her daytime talk show "The Talk". She said (see video below): "I'm actually not lost for words a lot, as you all know, but why do people just say this was true? How cold and callous are those headlines? Where's people's empathy?"

According to Sharon "it's not" true "by any stretch of the imagination" that Ozzy is near death. "I've been open with everyone and so has Ozzy," she said. "He had a terrible, terrible bout of bad luck with his health, one thing after another. And then after his fall that he had, it's been awful for him. But he's getting better. He's recuperating. Why be, like, 'He's [on a] crazy train,'... It's, like, how disrespectful to anyone…"

She added: "And I'd just like to say something: Ozzy ain't going nowhere."

Last month, Ozzy told U.K. tabloid The Sun that he has completed work on a new solo album, his first since 2010's "Scream".

Ozzy confirmed that he took just four weeks to record the new disc, saying: "This is my first [solo] recording in a studio for 10 years, so I do feel a bit out of touch." He told the Boston Herald last year that he had "a bunch of songs written" but was unsure when or how he would end up recording them.

Ozzy was in a coma for eight days in December of 2003 when he accidentally crashed an ATV while riding on the grounds of his English estate. He broke his collarbone, several ribs and a neck vertebra in the incident, of which he told The Pulse Of Radio he had very little memory.

Most of the 2019 shows on Ozzy's last full world tour have been rescheduled beginning in February 2020. Fans are being asked to hold on to their original tickets, as they will be honored for the rescheduled dates. Because some of the 2019 dates were festival appearances, not all will be rescheduled.

Ozzy will release a box set featuring his entire catalog of solo material on vinyl later this year. The 16-disc, 173-song limited edition package is titled "See You On The Other Side" and it will arrive on November 29.