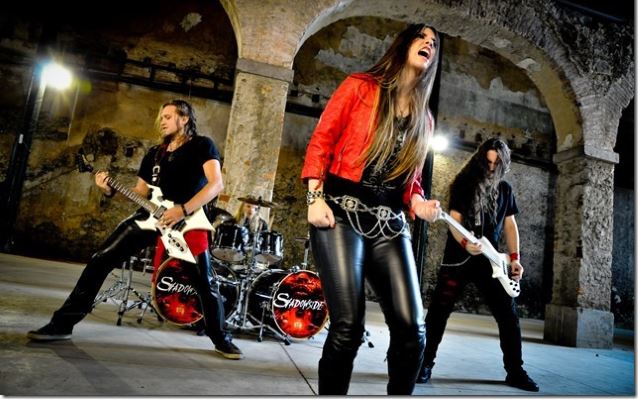 "Habitchual", the new video from Brazilian female-fronted metallers SHADOWSIDE, can be seen below. The clip was produced and directed by Studio Kaiowas and features an appearance by actress Rida Principessa.

"Habitchual" is taken from SHADOWSIDE's third album, "Inner Monster Out", which was released in May 2012 via Inner Wound Recordings. The CD was produced, mixed and mastered at Studio Fredman in Gothenburg, Sweden by Fredrik Nordström, who has previously worked with AT THE GATES, IN FLAMES, DARK TRANQUILLITY, ARCH ENEMY, SOILWORK and BRING ME THE HORIZON, among others. It features guest vocals from Björn "Speed" Strid (SOILWORK), Mikael Stanne (DARK TRANQUILLITY), and Niklas Isfeldt (DREAM EVIL).

SHADOWSIDE singer Dani Nolden stated about the band's latest CD, "'Inner Monster Out' is about letting your hidden persona show through, and about everything we always classify as not normal in human beings. The lyrics deal with everyone's fears, reactions, perversions, personality disorders and although it can be seen as a dark album, it also makes it clear that we all have a little bit of crazy and disturbed in a certain way. It's a musically intense album, with lots of angry guitars, bringing together the best of 'Dare To Dream' and 'Theatre Of Shadows', but with new and better things that we didn't try before. I'm especially proud and happy about the result we achieved on this album... we wrote and recorded songs that we like to hear and play and it's by far our best material so far."

SHADOWSIDE is working on material for its fourth album, which it expects to begin recording in mid-2015.