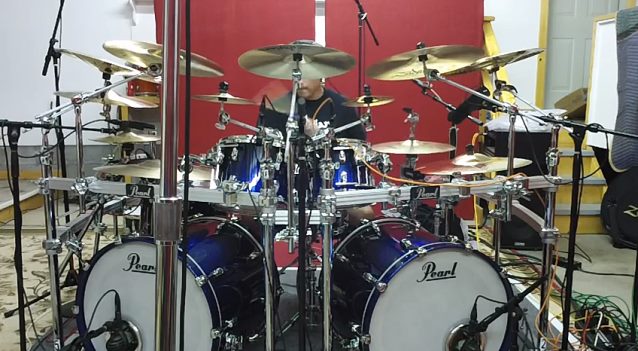 Video footage of SHADOWS FALL's Jason Bittner laying down the drum tracks to the song "Godless World" by a band called WITHIN THE FIRE can be seen below. Jason says: "It was pretty much a perfect take until the stick drop at the end… Of course, I edited that out!"

SHADOWS FALL tapped Willis Mathiasen of 2CENTS to sit behind the drums for some of their shows at the end of 2012 while Bittner received treatment for acute pancreatitis. Bittner rejoined his bandmates on stage on December 19, 2012 at Pearl St. in Northampton, Massachusetts.

SHADOWS FALL is continuing to tour in support of its new album, "Fire From The Sky", which sold around 10,000 copies in the United States in its first week of release to debut at position No. 38 on The Billboard 200 chart. The CD was released on May 15, 2012 via Razor & Tie.

Recorded at Zing Studios in late 2011, "Fire From The Sky" reunites SHADOWS FALL with longtime friend, producer/engineer and KILLSWITCH ENGAGE/TIMES OF GRACE guitarist Adam Dutkiewicz (THE DEVIL WEARS PRADA, ALL THAT REMAINS). The album was mixed by Brian Virtue and features some of the band's most complex and melodic material in years.