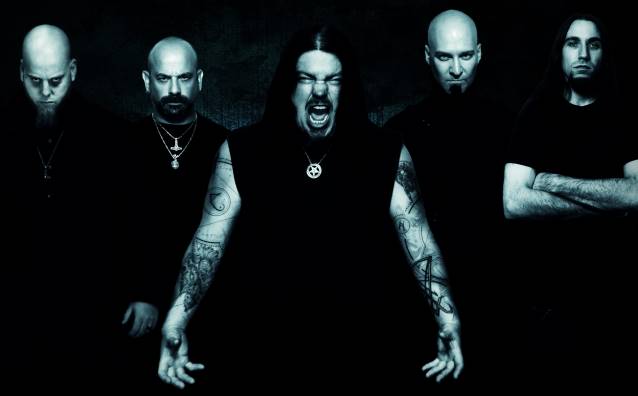 SHADOW SOCIETY, the Tampa Bay, Florida-based symphonic extreme metal act featuring members of DEICIDE, CIRCLE II CIRCLE and ORDER OF ENNEAD, has inked a deal with Loud Rage Music. The band released a debut EP, "Into The Unknown", in 2013, and is now putting the finishing touches on its debut album.

Said SHADOW SOCIETY vocalist Rob Thoth: "We are very excited to be working with Adrian and Loud Rage Music.

"When he approached the band and asked what we were looking for, I responded with, 'A label that appreciates our music and enjoys it, as well as wants to help take us to the next level.' We found those qualities in Loud Rage Music and are looking forward towards the next chapter for all of us! Plus, the label is based in Transylvania. Can you get any more dark and metal than that?"

Added Loud Rage Music owner Adrian: "We are very pleased to work with and for such a promising band as SHADOW SOCIETY.

"Tampa Bay, Florida gave the world some of the most influential names in death metal. It's time for a new name to emerge from those gifted lands, and SHADOW SOCIETY is that name.

"Judging by their impressive debut EP, 'Into The Unknown', I have no doubts the band will deliver an earth-shattering full-length album, so keep your eyes on Loud Rage Music and SHADOW SOCIETY for this album's developing story!"

SHADOW SOCIETY was formed in 2011 by Asgrim (IMMANIFEST, ROYAL ANGUISH, ex-COUNCIL OF THE FALLEN) and Rob Thoth (IMMANIFEST) with a very simple idea: no drama, no filler riffs and no compromise. In essence, SHADOW SOCIETY was forged to make music that they wanted to hear. Dark, foreboding, atmospheric, melodic and unforgettable are words used to describe the band's music. These ideals, together with the strength of the music, drew in other like-minded heavyweights in extreme music who wanted to shape these shared ideals and music into something uniquely their own.