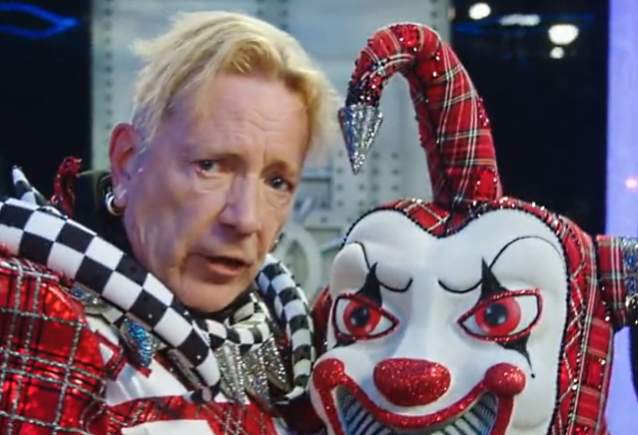 SEX PISTOLS frontman John Lydon (a.k.a. Johnny Rotten) was revealed to be the contestant dressed as a jester on reality singing competition "The Masked Singer".

Lydon had managed to keep his identity concealed from judges Ken Jeong, Jenny McCarthy, Nicole Scherzinger, Robin Thicke and Will.i.am while performing covers of Alice Cooper's "School's Out" and SOGGY BOTTOM BOYS' "I Am A Man Of Constant Sorrow".

After the judges guessed that the person behind the mask of The Jester was Cooper, THE WHO's Roger Daltrey, DEF LEPPARD's Joe Elliott, Sammy Hagar, TWISTED SISTER's Dee Snider and KISS's Gene Simmons, Lydon was eventually unveiled.

The 65-year-old later explained his decision to go on the popular show in an interview with Billboard, saying it was mostly as a gift to his wife.

"Someone contacted my manager and we discussed it and I thought it would be really good because it meant my lovely wife, who is suffering from Alzheimer's, might get a great sense of fun out of it if she managed to guess who it was," Lydon said. "We've lived together for 47 years, Nora and I, so she must have some clues as to who I am and what I can get up to."

He said that he would watch the show with his wife on FaceTime as he was away promoting his book "I Could Be Wrong, I Could Be Right".

"I can't travel with my lovely Nora, so I have to do it on FaceTime with her every night.

"I think she did guess... they made me a lovely pair of jester gloves for me and Nora had them on when I talked to her on FaceTime," he said.

Reflecting on his time on the show, which he described as "hilarious," he said: "I think you should make fun of everything you do. If you take yourself too serious there's not much place of a place left for you in this world. You have to have a sense of self-deprecation. I can't bear over-arrogant, overindulgent people. I'll tear myself down as much as anyone or anything else, probably more so. Hence that's the sadness in that character, the joker. The smile carries empathy and pathos at the same time.

He added, "We've only got one life, and you must explore all the possibilities and be limited by no one for no reason."