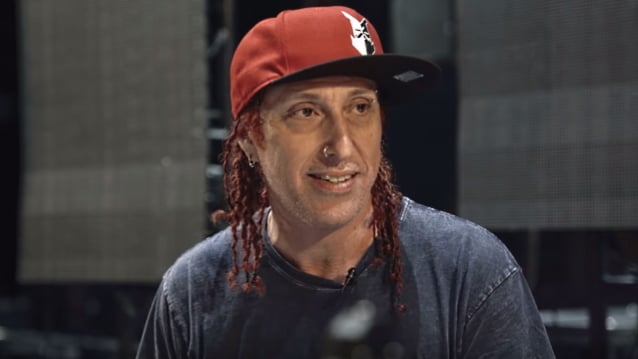 SEVENDUST drummer Morgan Rose is in "stable" condition after being hospitalized for an undisclosed illness earlier in the week.

On Wednesday (December 11), SEVENDUST announced that it was canceling its previously announced U.K. shows as the support act for ALTER BRIDGE and SHINEDOWN because Morgan was "sick" and "under doctor's orders not to leave the country." The trek was scheduled to kick off on December 14 at Motorpoint Arena in Nottingham and conclude on December 21 at The O2 in London.

Late last night, Trevor Omar, who works for Rose's official clothing line, Alien Freak Wear, issued an update on the drummer's condition, saying that "Morgan is in the hospital and stable" and asking fans to keep Rose in their "thoughts and prayers."

Omar wrote in a Facebook post: "Hey, everyone. Just wanted to pop on here will quick and post a message. First I want to thank everyone for keeping Morgan in your thoughts and prayers. Believe me it is truly appreciated.

"I know everyone would like an update & information as to what is going on, but all I can say for right now is that Morgan is in the hospital & stable. We will hopefully have a more clear idea of what's next tomorrow. So unfortunately there isn't many details that I or anyone else can give. Once there are details available to give, it will he passed on in the proper channels. And please do not believe something unless it comes from one of those channels.

"All the messages of support have been amazing, but unfortunately I cannot respond to each message. I am sorry. And just speaking for myself, I can only imagine how many messages everyone in 7D & MGT have received also. Please, be aware that it will be really difficult for anyone to respond to messages at this time. And that we all thank you for your love and support or Morgan.

"As soon as there is information that is able to be passed on, it will be. Trust me. In the mean time, please continue to keep my (our) friend Morgan in your thoughts and prayers.

"Again, Thank You for all your Love & Support."

SEVENDUST is still slated to play three "Acoustic Xmas" shows in Florida and Georgia at the end of the month.

Hey, everyone. Just wanted to pop on here will quick and post a message. First I want to thank everyone for keeping...