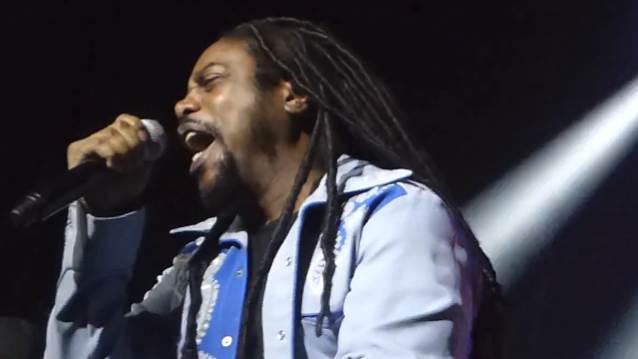 During an appearance on the latest episode of "Jon's Untitled Podcast", SEVENDUST frontman Lajon Witherspoon was asked if he has plans to work on more solo material as a follow-up to last year's "Love Song" standalone single. He responded (hear audio below): "Actually, I'm still working on some more of my own solo stuff. So I'm excited about that."

He continued: "I put a song out on iTunes called 'Love Song' that some people seemed to dig. It was a little different side to what I do.

"I know that I'll be doing some writing with a very well-known singer in the rock world that I really admire that I think a lot of people will be excited about; I can't say no more than that. [Laughs] We've been wanting to do some music for a long time, so we're gonna make that happen and it'll be with my solo stuff.

"So, yeah, just in the future here — not too long," he added. "When the SEVENDUST ship starts slowing down a little bit, taking on a little water. [Laughs]"

Witherspoon has been talking about pursuing a solo project for at least the past five years. He told Alternative Addiction in a 2013 interview that his solo material would be a departure from the sound SEVENDUST fans have come to expect from him.

"When I sing and people hear my voice, I have to believe they'll compare it to SEVENDUST, which I don't mind, because that's where my roots are," he said. "But I think my stuff will definitely have rock and a lot more soul. SEVENDUST has a groove, but I think I'll be a little bit different."

SEVENDUST is continuing to tour in support of its latest album, "All I See Is War", which was released May 11 via Rise Records. The album was produced by Michael "Elvis" Baskette, who has previously worked with Slash and ALTER BRIDGE, among other artists.