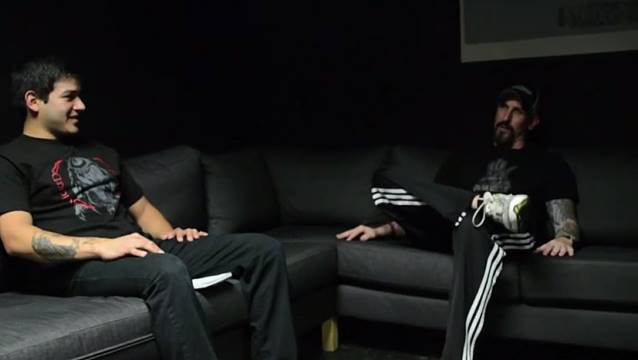 On June 23, Jorge of TheNewFury.com conducted an interview with guitarist John Connolly of SEVENDUST at the Nashville stop of the "An Evening With Sevendust" tour. You can now watch the chat below.

The City Drive Entertainment Group has announced it has made a deal to film SEVENDUST for a landmark multi-show live DVD and documentary.

Production on the feature-length documentary is set to begin immediately and take six months, and will include historical footage; footage from the band's current "An Evening With Sevendust" acoustic tour; interviews; and cameos from Tommy Lee (MÖTLEY CRÜE), Mark Tremonti (ALTER BRIDGE), Scott Phillips (ALTER BRIDGE and also a member of SEVENDUST guitarist John Connolly and bassist Vince Hornsby's band, PROJECTED), Wolfgang Van Halen and many others. City Drive/DC3 will film the concert portion of the project in New York City. They expect to film two full-length shows back-to-back: an acoustic show followed by a plugged-in show — the band's last plugged-in show of 2014. The band will offer tickets for both shows to fans at one price and they're expecting a very quick sellout.

Guitarist Clint Lowery explains: "The essence of this band is playing live and that's what we're finally documenting for this project. What's unique about it is that it will share both sides of this band — the melodic and the aggressive — with our most die-hard fans. This film is a heartfelt way to show them, our children and the whole world who we were, who we became, where we are and where we're going."

"We're already on the road to make this project happen," says award-winning film director Daniel Catullo III, CEO of The City Drive Entertainment Group and DC3 Music Group, the director and producer of the project. He started shooting Sunday, June 8 at the band's show in at the Starland Theatre in Sayreville, New Jersey, just across the river from New York City. "We aim to capture the band's live essence — acoustic and plugged-in — as well as to document their long history of genre-bending innovation in the hard rock arena."

"Fans will be part of the films, and how could they not be?" Catullo adds. "They are the heart of SEVENDUST's success and literally made the band's current album possible." The film will feature interviews with up to 100 fans. Catullo urges fans that want to be interviewed for the film to put in their requests at [email protected] City Drive/DC3 expects to release the DVD/CD project in early 2015.

SEVENDUST's new acoustic album, "Time Travelers & Bonfires", sold around 15,000 copies in the United States in its first week of release to debut at position No. 19 on The Billboard 200 chart. The CD was made available on April 15 via 7Bros. Records, in conjunction with ADA Label Services.