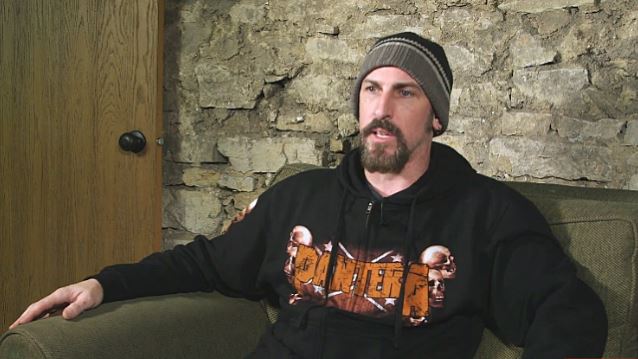 The Front Row Report recently conducted an interview with SEVENDUST guitarist John Connolly. You can now listen to the chat in the YouTube clip below.

SEVENDUST's new acoustic album, "Time Travelers & Bonfires", sold around 15,000 copies in the United States in its first week of release to debut at position No. 19 on The Billboard 200 chart. The CD was made available on April 15 via 7Bros. Records, in conjunction with ADA Label Services.

The Atlanta band — Lajon Witherspoon (vocals), Morgan Rose (drums/vocals), Clint Lowery (guitar/vocals), John Connolly (guitar/vocals) and Vince Hornsby (bass/vocals) — recorded "Time Travelers & Bonfires" at Architekt Studios in Butler, New Jersey (where they recorded their previous "Black Out The Sun" album). It is a collection of brand new songs, along with re-recorded SEVENDUST classics. Newly re-recorded songs include "Black", "Gone", "Denial", "Karma", "Trust" and "Crucified". Six brand new songs have also been written and recorded for the acoustic album. It's not the first time SEVENDUST has explored their acoustic side. Their critically acclaimed "Southside Double-Wide" live acoustic album was released in 2004.

"People liked ['Southside Double-Wide'] so much and have asked for so many years for us to do it again that we had a meeting and said, 'Hmm, why don't we do an acoustic album and see what happens," Witherspoon told Billboard.com.

"We went in full guns blazin', man," he added. "It was serious work. It was a serious project. We wanted to come different and bring the different sound and still have that acoustic element there but give it some salt, too, and keep it in that SEVENDUST vein that we're still gonna be able to have a good time and stand up and jump around and not do it in the same vein people are normally used to."