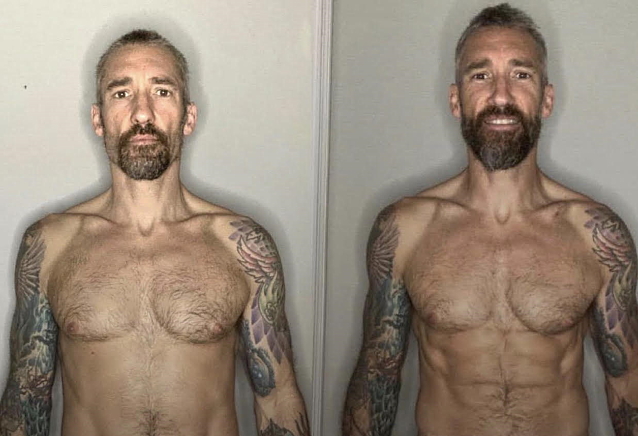 SEVENDUST's Clint Lowery has unveiled his fitness transformation after completing the "75 Hard" challenge.

The 49-year-old guitarist underwent "75 Hard", which is particularly popular among TikTok users, at the urging of his wife of 11 years, Tara.

"75 Hard" is the brainchild of entreprenteur and "Real AF" podcaster Andy Frisella, who set it up as a "transformative mental toughness program."

Earlier today, Clint shared shirtless images of himself revealing his rippling eight-pack and biceps, after weeks of hard work. He wrote in an accompanying message: "Today I completed the 75 hard challenge with my wife. This is her second time doing it. She asked me to commit to it with her and I'm glad I did.

"Throughout the last couple months I've read more than ever, drank more water, trained outside and became a mountain bike enthusiast- We had to find ways to fit in 2 45 min workouts daily when it was a total pain in the ass. Once we found the rhythm of it and accepted it we found ourselves enjoying it.

"The no drinking for me wasn't a challenge, I haven't drank since 2007. For the nutrition piece I stopped eating past 5:30-6pm and tried to eat a balanced diet. I have found out through this that I can adapt, I can learn and do more than I think I can. Without getting cheesy motivational/soapbox world here, I just feel good.

"I'm so proud of my wife who just attacked this. Two and half months will throw some curve balls your way and she didn't let up.

"Fitness is a huge part of my emotional health. My sobriety, my sanity.

"I try to spare you on posting this stuff here because it's not everyone's journey and sometimes comes off as a case of the 'look at Mes'.

"Someone shared this challenge with us and helped improve our lives. Maybe it will do the same for you. Give it a whirl, what's the worst thing that can happen @lifewiththelowerys @andyfrisella #75hardchallenge".

A number of experts have voiced their concerns about "75 Hard", saying that many people opt to ignore the "75 Hard" recommendations and begin the workout plan without seeking advice from a physician first, which can be dangerous.

Lowery became sober 14 years ago after being arrested at the Hodokvas festival in Piestany, Slovakia following what was described as a "wild drunken night" that resulted in the musician trashing his room. At the time, Lowery was on tour with KORN as the latter band's backing/session guitarist. A day following Lowery's arrest, he was released from police custody after apologizing and paying for the damages. He later released a statement explaining that he was "being a lil' rowdy and loud" in his hotel and acknowledging that he "pulled some Rock 101 stuff." He added that he was "not proud of it at all" and claimed that the entire episode was "scary enough" to where he knew he would never be doing anything like that "ever again."