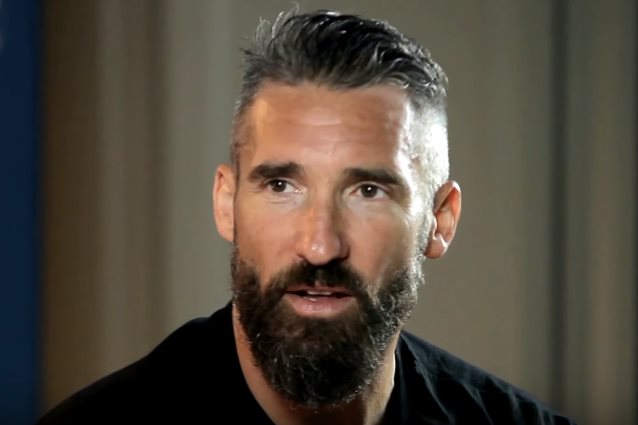 Scott Bowling of "Good Company" (web site) recently conducted an interview with SEVENDUST guitarist Clint Lowery. You can now watch the chat below.

Speaking about SEVENDUST's plans for the follow-up to 2015's "Kill The Flaw" album, Lowery said: "We're gonna do another record in November, man. We just started writing for it.

"It's a different era, man," he continued. "It's, like, I'm touring with SEETHER [as the band's second guitarist], so there's that; I'm really focused on that. But we've [SEVENDUST] been demoing some stuff out, the same kind of creative team, and we're gonna see what happens. We're excited about it. We have a new label, Rise, and they've got some great bands, a great, creative team over there. So this will be our first real label that the band's ever had."

Asked if it's true that SEVENDUST will be working with producer Michael "Elvis" Baskette (ALTER BRIDGE, SLASH) on the upcoming disc, Clint said: "I think so. It's still kind of in the works, but I think the label, they really want us to use someone outside of someone that we've already been with, just to break it up, and they're really pushing for it. So Elvis seems like a good fit."

"I don't wanna do full-length records anymore," he said. "I mean, I'm old school — I love vinyl and I love the whole presentation of a full record — but I do wanna be open to new ways to release music. I don't feel like going in and taking a full year and this huge production and doing a full record. I mean, I believe in doing those, but I also believe that between these record cycles, just throw in a couple of sprinklings of new songs."

He added: "I'm never gonna be one of those guys [that will say], 'Oh, don't try it. Let's just stick to the old thing until it's completely ran into the ground.' I'm open for new guys, a new energy and a new release strategy."

SEVENDUST last year received its first-ever Grammy nomination after two decades together as a band. "Thank You", the debut single from "Kill The Flaw", received a nomination for "Best Metal Performance".

SEVENDUST is comprised of singer Lajon Witherspoon, the dual-guitar attack of Lowery and John Connolly, and the driving rhythm section of Vince Hornsby on bass and Morgan Rose on drums.