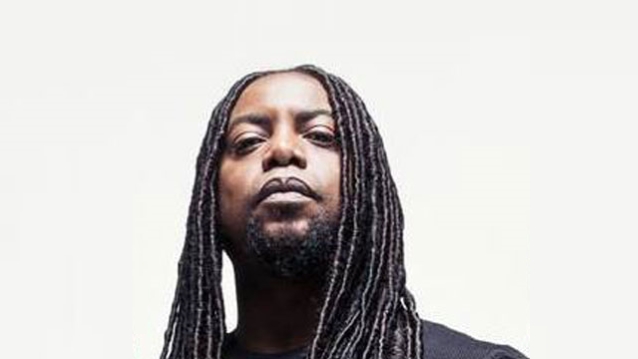 SEVENDUST vocalist Lajon Witherspoon was recently interviewed by Anne Erickson of Audio Ink Radio. The full conversation can be streamed below. A few excerpts follow (as transcribed by BLABBERMOUTH.NET).

On the group's upcoming tour with SKILLET, POP EVIL and DEVOUR THE DAY:

Lajon: "We know everyone on the bill. I've always wanted to tour with SKILLET since I fell in love with the band the first time I heard them. It's going to be fun. For me, it's like a family reunion kind of tour. I'm really excited. We've had a break, and it's time to get back out there and rock for a little while... Me personally, I love all the bands, so I hope that's the feeling that everyone's getting [and] that they're going to come out and from start to finish see bands that are great, and just have a good time. It's all about the music and trying to unplug from the crazy things that may be at home or at work or what's going on in life — just unplug for a minute and enjoy music, because I think it's a healer. I feel like this tour's definitely going to be a healing-type of tour."

On what the group plans to perform live:

Lajon: "We're definitely going to switch it up a little bit. We haven't really talked about it. We'll definitely pull in some heavy hitters. We have so many songs right now since we're old men. We've got a big catalog to pick from, so we'll probably change the set around a lot of times on the tour [to] see what feels best."

On whether it really feels as if SEVENDUST has now been a band for more than two decades:

Lajon: "No, not at all, but then, I'll look at some of the pictures and I'm like, 'Wow, I do remember that, and I guess it was 20 years ago.' It's kind of hard to believe, because I really feel like music definitely keeps you young. It depends on the way you go about it. I'm a true believer in moderation. It's been crazy. We've been blessed. Not a lot of people can say that they've been able to do something that they love for that long, and to keep it together, what a pleasure it has been. It's definitely not all roses and gold – it's been a hard road — but what more could you ask for, to still be able to be relevant in this frugal world of the music industry?"

On the group's latest album, "All I See Is War":

Lajon: "The album was so great to be able to do with Elvis [producer Michael Baskette], and to get out and do the songs live, it's been really exciting. It's always fun to have new music. Even still right now, there's still songs that people haven't heard, so there's still room to keep adding songs."

On when to expect new music from the band:

Lajon: "We're writing now. We've already had, like, two writing sessions. I really feel like we have some stuff that's really going to stick on this album. That's exciting. We'll go in the studio not too long from now. Everyone's excited to go in and start testing out some of this new stuff and seeing what our producer feels like, and if he likes the direction. We're definitely happy with what's going on right now. We're taking our time [and are in] no hurry right now, but I think half the album [is written]. We're going to work with Elvis again. It's coming naturally — it's just us jamming and doing what we do and being the weirdos that we are."

On who he'd like SEVENDUST to tour alongside that the group's already shared the stage with:

Lajon: "I love the band HYRO THE HERO. I'd love to be able to bring those guys out on tour with us one of these days. I still want to go out with my brothers FIVE FINGER DEATH PUNCH. I think that would be a great [package]. A PERFECT CIRCLE, TOOL — I'd love to tour with those guys."

On his forthcoming solo album:

Lajon: "[I'm] trying to keep it [on the] down-low, but I'm working on a little solo project myself. It's no big deal — I'm not putting any pressure upon it — but it's been fun to work and do music to the side. I'm excited about that."

SEVENDUST's tour with SKILLET kicks off August 11 in Memphis, Tennessee.

SEVENDUST's latest album, "All I See Is War", was released in May of 2018. It marked the group's first album for Rise Records, the Oregon-based metal and hard rock label which was purchased by BMG in 2015.