SEVENDUST will celebrate the 20th anniversary of the release of its self-titled debut album by performing the record in its entirety at several shows this June.

SEVENDUST previously played all of its first disc at a special hometown show on March 17 at the Masquerade in Atlanta, Georgia. Video footage of the concert can be seen below.

Originally released in 1997 via TVT Records, "Sevendust" was recorded in Atlanta during the tragic terrorist bombing of the 1996 Summer Olympic Games. The widespread panic in Atlanta at the time fueled the band to create one of the fiercest albums to date.

"Sevendust" was made available as a deluxe reissue in 2010. Produced by Jay Jay French and Mark Mendoza of TWISTED SISTER, the original has sold more than 700,000 copies and was certified gold in 1999. The digitally remastered reissue provided some extra muscle to all of the original hits (including "Black" and "Bitch") and tacked on five bonus tracks and a DVD, which featured the nationally aired TV special "Live And Loud", recorded at The Metro in Chicago, and additional never-before-seen live and behind the scenes footage of the band. The bonus tracks were culled from various releases, making the definitive edition a must-have for any fan. "Breathe" was previously only available on the "Strangeland" film soundtrack, "Terminator (Breathe Remix)" on the MTV "Celebrity Death Match" soundtrack, and live renditions of "Bitch" and "Prayer" were only released on the Japanese edition of the record. "Sevendust (Definitive Edition)" also included a cover of ALICE COOPER's legendary summer anthem "School's Out".

In a 2016 interview with Myglobalmind, Connolly stated about the band's longevity: "I think it's just a mutual respect we have for each other. When Clint left, that separation period was needed on both sides. He needed to step away, take care of his business. and find his path again and we needed the same. Instead of letting that moment in time define the band, everyone was up for the challenge. Clint went to play with his brother in the band DARK NEW DAY. We put out three records during that time and when he came back it just felt like that original chemistry."

He added: "We enjoy making music with each other and we still have that excitement from the first day of rehearsal. We don't look at it as being together for 20 years; we just enjoy jamming with each other. We're brothers and fight like cats and dogs but we have each other backs — we're family." 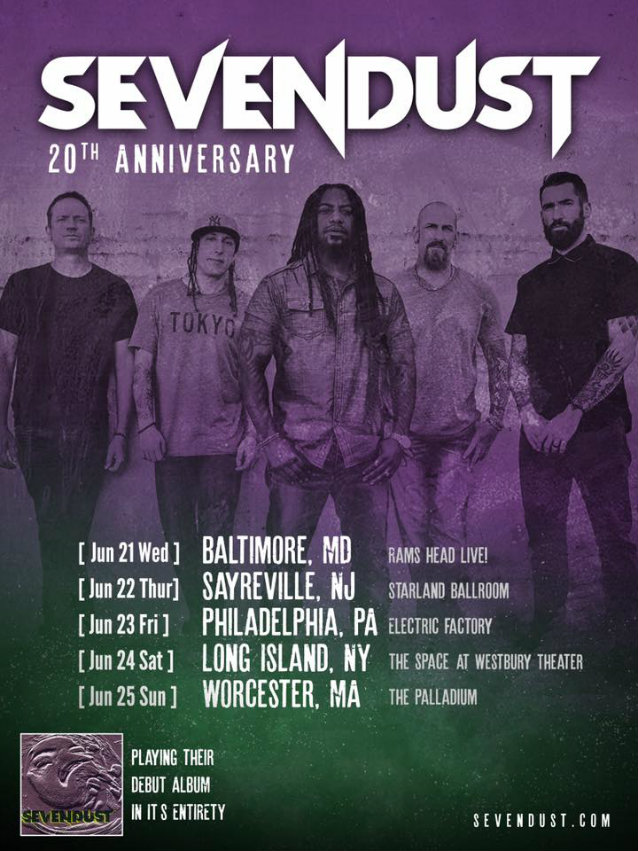