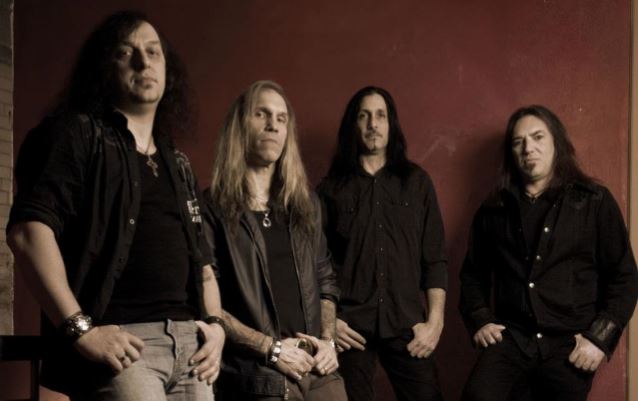 SEVEN WITCHES is putting the finishing touches on the follow-up to 2013's "Rebirth", tentatively titled "The Way Of The Wicked". The new CD is being mixed by Joey Vera (FATES WARNING, ARMORED SAINT, MOTOR SISTER) and will be distributed by ILS/Caroline in the U.S.

SEVEN WITCHES leader Jack Frost says: "I pushed myself harder than ever as a player/producer. I owe that to the amazing job that Johnny Kelly [DANZIG, TYPE O NEGATIVE, KILL DEVIL HILL] did during drum tracking.

"Johnny's playing is the stuff of legends. Everything you hear is the man himself. Reminiscent of Cozy Powell, John Bonham and Bill Ward. I'm so honored to call him my drummer and brother! His playing made me push myself to a new level!"

He continues: "This CD will surprise a lot of people. [It's] not a typical WITCHES CD. It has a very bluesy feel. It's still heavy, but there's a groove element. Take LED ZEPPELIN, BAD COMPANY and WHITESNAKE and smash in a little NWOBHM and there you have it!

"Ronnie Parkes's [bass] tone and monster riffing have given the songs final life.

"As I sit and listen, I can't believe these are the same tracks from the original demos. It's like watching a child grow.

"Sorry, I've never been so happy with songs that I created. Maybe it's just that I didn't push; I just put my heart into it."

"Jack and I work together to try to do what's best for the song.

"I call Jack the mad scientist; his ideas are all over the place. And I think it's great!

"This CD will have something for everyone. It's not cookie cutter or intended to sound like previous releases. It's new music.

"I have a lot of respect for all the vocalists that came before me. But it is not my intention to try and be one of them; I just try to do the songs that they recorded justice when I get onstage."

SEVEN WITCHES will play a couple of East Coast shows with SAXON and ARMORED SAINT in May.