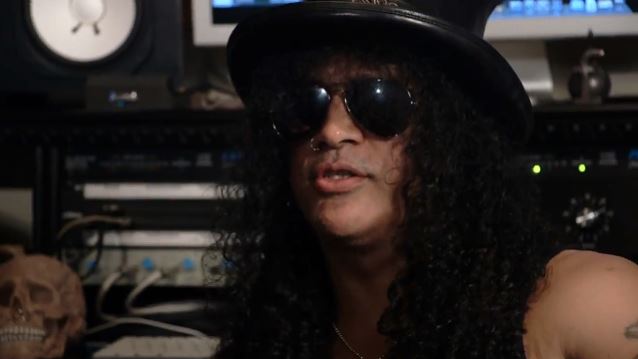 Grammy Award-winning musician Slash, hailed as one of the 10 best electric guitar players of all time by Time magazine, joined forces with Universal Studios Hollywood to compose an original score for the theme park's hypnotizing new 3D maze "Clowns 3D Music By Slash" at "Halloween Horror Nights", which officially opened on Friday, September 19.

While partnering with top recording artists has become a signature of "Halloween Horror Nights", this collaboration with prolific guitarist Slash marks the first time a musician has created an original maze score for the popular event. This inspired effort comes at a demanding time for Slash, whose new album, "World on Fire", was released on September 16, on the heels of his "Let Rock Rule" world tour with AEROSMITH.

Infused with the rocker's hell-raising electric guitar riffs, the ominous new "Clowns 3D Music By Slash" haunted attraction is no laughing matter as it unmasks the psychological disorder known as coulrophobia, a disturbing condition affecting those with an extreme and irrational fear of clowns.

The psychedelic 3D maze will horrify guests, taunting and tempting them with terror and treats as they parade through "Sweet Licks Frozen Clown Pops Family Amusement Center," a dilapidated roadside attraction and one-time thriving ice cream factory run by deranged siblings and their mad clown father, Sweet Licks. As this demented trio schemes to restore the family business by luring visitors with free ice cream, guests will soon find themselves on the menu as the key ingredient of a sick new high-protein ice cream concoction.

"I'd gone last year to go check this Universal thing out," Slash told the 101KGB radio station in San Diego on September 18. "And it was just unbelievable. It was so cool and so well done and so fun, but at the same time scary. I was floored. And one of the cool things that they had there was the BLACK SABBATH 3D maze, which was literally the coolest thing I'd seen to date. And so, John Murdy, who's created this event at Universal, I was hanging out with him. I was like a little kid: 'How does this work? How did you get that to work?' Blah blah blah. And I think he dug the enthusiasm. Anyway, so six months later, he called me up and asked me if I'd be interested in writing music for this all-original 3D clown maze that they were doing. And I jumped at the chance. And it came out really, really cool. And the maze itself is super creepy. If you have coulrophobia [the fear of clowns], you're gonna have a problem.

A seven-minute look at "Clowns 3D Music By Slash" is available below.

"It's an honor to collaborate with one of the most iconic rock legends around," said John Murdy, creative director at Universal Studios Hollywood and executive producer of "Halloween Horror Nights". "From the moment I heard Slash's original composition for the maze, I immediately knew he got it, as the vibe and feel of his score are so right on. He captured the exact tone we were looking to convey to our guests, and it's great having Slash be a part of this incredible event."

"Halloween Horror Nights" 2014 at Universal Studios Hollywood is "More Dead Than Ever", as it brings together the sickest minds in horror to immerse guests in the living, breathing, three-dimensional world of the most notorious and terrifying creatures in existence. This year's event will feature a slate of all-new unrivaled film production quality mazes, terror-filled scare zones and a fully re-imagined "Terror Tram" experience, uniquely themed to today's most definitive horror properties, including, "The Walking Dead: The End of the Line," based on AMC's critically-acclaimed, Golden Globe-nominated and Emmy Award-winning television series; "From Dusk Till Dawn", inspired by Robert Rodriguez's cult film and El Rey network's TV series; "Dracula Untold: Reign of Blood", based on Universal Pictures' upcoming epic action-adventure; "AVP: Alien vs. Predator", based on the Twentieth Century Fox film franchise; "An American Werewolf in London", based on Universal Pictures' Academy Award-winning and genre-defining film, written and directed by John Landis; "Face Off: In The Flesh", based on Syfy's hit TV series, and "The Purge: Anarchy", a new scare zone inspired by Universal Pictures' blockbuster thriller.