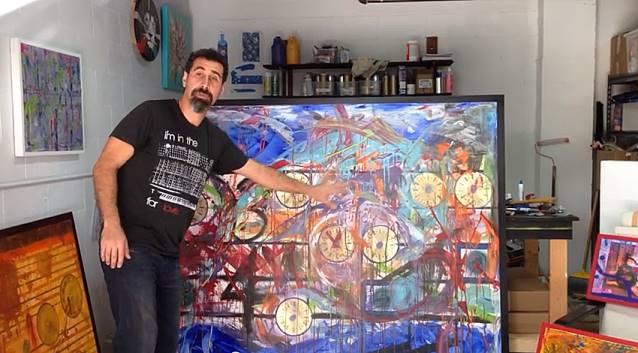 Project Gallery welcomes multifaceted musician, artist, poet and activist Serj Tankian in the premiere of his debut interactive art exhibit, "Disarming Time". A uniquely audible and visual experience, "Disarming Time" features a collection of Tankian's 22 original art pieces: paintings, mixed media and sculptural works paired with a track of music composed specifically for each visual work. Via a set of headphones accompanied by his newly created iOS/Android application "Eye For Sound" (powered by VStory), smartphones are able to scan and recognize art and immediately cue the associated audio track and other content. Of the project which began in early 2013, Tankian says, "The urge came to me in the discovery that music has become so temporal and devalued in the world today, so I wanted to create an exclusive experience…something unique for someone to hold so they become the only person to experience this. I'm aiming to have people SEE the music and HEAR the art. Using a modern app, we're able to take Kandinsky's 'Synesthesia' to a whole new level."

Serj Tankian was on born August 21, 1967 in Beirut, Lebanon and is an Armenian-American singer-songwriter, composer, multi-instrumentalist, record producer, poet, painter and political activist. He is best known as the lead vocalist, songwriter, keyboardist and occasional live rhythm guitarist of the metal band SYSTEM OF A DOWN. During his musical career, Tankian has released five albums with SYSTEM OF A DOWN, one with Arto Tunçboyacıyan ("Serart"), as well as four solo albums: "Elect The Dead", "Imperfect Harmonies", "Harakiri" and "Orca", his first real classical symphony. A live orchestral version of "Elect The Dead" incorporating the Auckland Philharmonia Orchestra named "Elect The Dead Symphony" was released in 2009. He's also released two books of poetry, "Cool Gardens" and "Glaring Through Oblivion". In 2002, Tankian and RAGE AGAINST THE MACHINE/AUDIOSLAVE guitarist Tom Morello co-founded a non-profit organization, Axis Of Justice. Tankian also founded the record label Serjical Strike Records and in 2011 he was awarded the Armenian Prime Minister's Medal for his contributions to the recognition of the Armenian Genocide and the advancement of music.

The application "Eye For Sound" was born from the desire to create a unique and immersive musical experience that reconnects the value of tangible products to music. It provides a fusion of art and music easily accessed through a smartphone or tablet making each experience personal and unique to each user. By exploring the simultaneous connection between art and music via optical recognition, each user experiences a one of a kind stimulation of the senses. "Eye For Sound" was created with broad intention and aims to become a platform for other artists to utilize.

Beautifully designed, Project Gallery is a cultural destination located in the center of Hollywood, California.