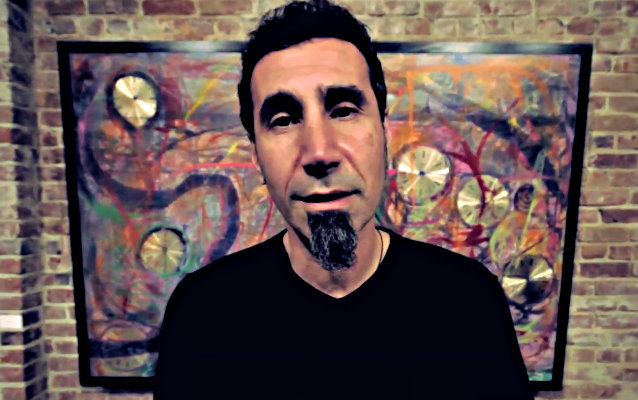 David Farrier of New Zealand's 3 News recently conducted an interview with SYSTEM OF A DOWN singer Serj Tankian. You can now watch the chat at this location. A couple of excerpts follow.

3 News: Are you looking forward to the Christchurch show?

Tankian: I am looking forward to it very much. In fact, we've been planning on having a show with the Christchurch Symphony Orchestra for many years. My friend Hamish McKeich, who conducted our APO show years ago in 2009 in Auckland, he's the one who called the Christchurch Symphony Orchestra, and they were keen on working with us. So we've been trying to plan this for a few years, and we've had very busy schedules, and touring elsewhere, so this year knowing I am going to be spending a nice chunk of time in New Zealand I decided let's definitely go ahead and do the show.

3 News: You've been touring a lot with SYSTEM. Is it hard to get your head into another space with the orchestral music, or is it quite organic?

Tankian: It's not really difficult jumping from one band or musical project to the other. In fact, in Europe and Russia I went from doing three weeks with SYSTEM to doing three weeks with an orchestra. It's actually really great. It's kind of like going to the gym: With SYSTEM, you are getting your cardio, because you are just running, jumping and doing these crazy acrobatics both vocally and physically. And with the orchestra you are sitting there and it's more of a spiritual, emotional, intimate connection musically. And it's a different value in terms of the connectivity with the audience. One is a huge festival type of audience with SYSTEM, and the other is a beautiful theatre, like the Auckland Town Hall, or as it will be in Christchurch. I like the diversity.

Tankian: I would bet that rock critics wouldn't love a symphony record, I would bet classical critics are not going to love someone coming from the rock world and doing a symphony record. I would bet that jazz purists writers, in fact I know jazz purist writers, are not into my "Jazz-Is-Christ" record. But hey, that's okay! Because I am making the music that is coming to me from the universe, and I am presenting it the best way I can. And I am putting a spin on it that is uniquely what I do. And as long as my fans and people who are following me like it, I'm happy with it and thankful for it.

3 News: Do you find it refreshing to be in New Zealand where, I guess, politically, we're a bit more — I suppose the issues are a bit smaller here. Do you find that an encouraging thing?

Tankian: I do. I mean, obviously, New Zealand has its own issues that we grapple with here, but yeah, the geo-political issues are way more tame. The semi-neutrality of the country is definitely very progressive outlook. Many nations can benefit from that kind of perspective. And kiwis are quite wise politically, in terms of international politics, because they read. Most people in America don't read! And the education system is great. I think it's not just enough to have a democracy, it's important to have an educated democracy, because without an educated, literate democracy, you can have a George Bush as your leader. And that can be maybe as dangerous as having Assad as your leader in some cases! [laughter]. Coming to New Zealand it's refreshing, every year I live between here and Los Angeles and it slows things down on a beautiful level, and increases the lifestyle for me. The quality of the lifestyle, the people I interact with and the relationships that I develop. And it's a different world and I'd love it to stay like that forever.

3 News: Are you glad you moved to New Zealand?

Tankian: I'm more than glad, I am ecstatic. It's my haven. And it's also a place where I feel more creative. And I feel more at home in myself to be honest with you. And I have lived in L.A. since 1975, which is a lot of years. And I have a lot of friends there, and family there, and it's difficult to move away. My work is mostly there, the entertainment industry is there, and I've been scoring for films and video games, and the music industry is based there in the world. And to have that excitement and working there is great. But when I get off tour, I don't think of going to my place in L.A., I think of coming to New Zealand as home. Because I feel more at home here.

Read the entire interview at 3 News.