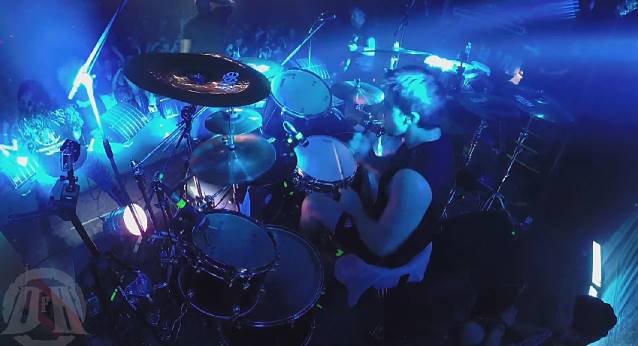 Drum-cam footage of SEPULTURA's Eloy Casagrande performing the song "The Vatican" on February 14 in Katowice, Poland can be seen below.

SEPULTURA played its first show with Casagrande on November 25, 2011 in Lichtenfels, Germany.

Casagrande joined SEPULTURA as the replacement for Jean Dolabella, who left the band because he could no longer handle being away from home for long periods of time.

Eloy is a 23-year-old drum prodigy from São Paulo, Brazil who won the Modern Drummer "Undiscovered Drummer" contest as a teenager in 2006.

Asked what Casagrande has added to the band, SEPULTURA singer Derrick Green told Metal Hammer, "Definitely the fact that he's young and that energy helps a lot. He's a very disciplined drummer — he's been playing since he was seven. And he's been doing a lot of things by himself and playing with different people, and that's really, really impressive. He had a lot of things put together before we even met him; he's already done so much. And I think with us, a combination us together, it's a great learning process for him to grow and at the same time, we're learning a lot from him, so we can do this together. And this is something extremely important when you're doing a band that's been together for so long, to have this connection. And we felt this connection with him immediately. And we could tell that he was very focused and very committed to doing extremely good music."

Dolabella left SEPULTURA after a five-year run of relentless touring and two studio albums. He joined SEPULTURA in 2006 following the departure of the band's original drummer, Igor Cavalera.