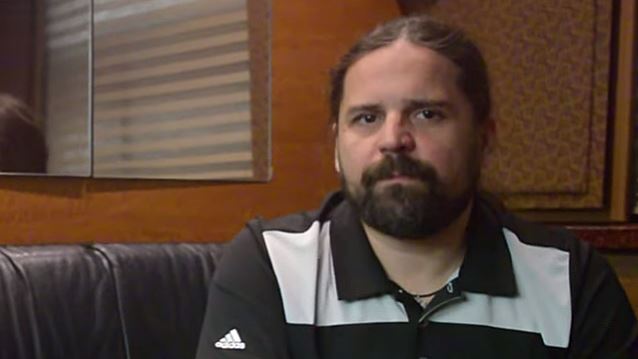 Alex Stojanovic of Metal Master Kingdom conducted an interview with guitarist Andreas Kisser of Brazilian/American metallers SEPULTURA on May 28 at The Opera House in Toronto, Ontario, Canada. You can now watch the chat below. A couple of excerpts follow (transcribed by BLABBERMOUTH.NET).

Andreas: "I hope so, man. I wish the second… the other dimension will be possible, because I could do it in the other dimension. [Laughs] I mean, there's so much stuff to do… fortunately. I have DE LA TIERRA, which is another group, that I sing in Spanish, you know, metal. I have another group with my son, the KISSER CLAN, and we only play covers and stuff. I do some guitar clinics in Brazil as well, so it's hard, really, to find that perfect time, really, to stop and really do that. But I have a demo… I mean, since the album came out in 2009, so I have many little demos that I write stuff all the time. So I have pretty much a new solo album ready to go. But I just don't have, really, the time now to stop and really produce that. But hopefully in the next year or two. I'm not in a hurry, really. I think 'Hubris' was a very special project that I put everything there: acoustic, instrumental, Portuguese, English… I called many friends to be a part of it. But this one I wanna do, I think, more like a… Because 'Hubris' took, like, four years to make; it was a double album [that was recorded in] many diferent studios and stuff. This one I wanna just focus — stop [for] a month or two and really do it."

On MEGADETH's recent addition of Brazilian guitarist Kiko Loureiro, best known for his work with ANGRA:

Andreas: "Finally they found out! [Laughs] The Brazilian source of… you know… But that's great for the country, man. We have [drummer] Aquiles Priester as well, playing with PRIMAL FEAR and so many different bands. And it's great to see the Brazilian musicians having this opportunity, because, you know, it is a very musical country. We have our own kind of groove and melodies and stuff that can help. You know, it helped a lot SEPULTURA to help achieve our own original sound. And it'll be great to… I think it's great for MEGADETH and for Kiko as well… for both. I mean, for Kiko, it's insane. A professional, amazing musician… I'm happy to see it's paying off, all the hard work that he put [in] and the study an deverything. He's a great guy and he deserves that. And for MEGADETH as well. It's great to see that Kiko's gonna join and gonna put some of the Brazilian elements there naturally, because he is from Brazil. So I'm very curious to listen to this album and I'm very happy for both of them. I'm very good friends of Dave Ellefson [MEGADETH bassist], especially, and I'm very happy for all of them."

This is not the first time a member of SEPULTURA has collaborated with DarkSide Books. Back in 2013, Kisser wrote the foreword to the BLACK SABBATH biography "Destruição Desencadeada".