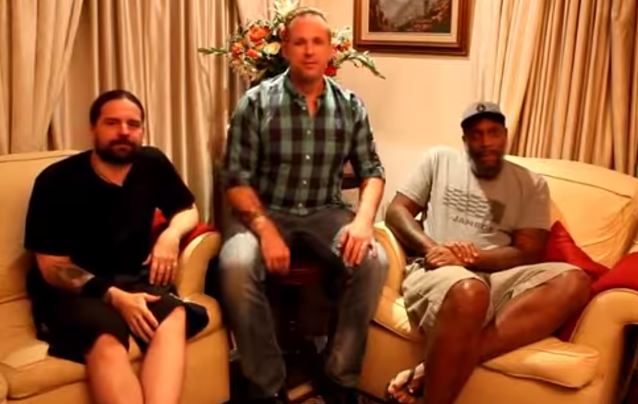 Witchdoctor Productions conducted an interview with guitarist Andreas Kisser and vocalist Derrick Green of Brazilian/American metallers SEPULTURA during the band's recent visit to South Africa. You can now watch the chat below. A couple of excerpts follow (transcribed by BLABBERMOUTH.NET).

"Just to be in a band like SEPULTURA is a privilege for start, and then the good and the bad pressure of being in a band like that. Like all the changes inside the band, and trying to do the best always, trying to express ourselves the most honest way. We really are what we are. We're not trying to bullshit our fans. We play songs from all over the SEPULTURA career, regardless of the formation or record label or any political contract or whatever. From 'Bestial Devastation' to 'Mediator', we respect the SEPULTURA history. We're celebrating 30 years of our history. It's a very special date, very special, because it's a beautiful history from a band from Brazil going everywhere and have so much respect all over the place. And now in 2014, still have the kind of feeling coming back here with a new formation and new energy, but a very honest and true energy. We're here now. So that's the most important thing. From 'Kairos', that's the main message: we respect our past, but we're not trapped in our past. Today is a new experience. South Africa is different from 2003. We're different, in a better way, we all hope. [Laughs] But anyway, we're here now to celebrate 30 years of such a great history, and it's great. We are so thankful for this reception that we always have here — open arms and great vibe, very positive. And that's the way it's supposed to be."

On performing SEPULTURA's "Roots Bloody Roots" with KORN on October 19, 2013 at the Monsters Of Rock festival in São Paulo, Brazil:

Andreas: "That was amazing [and] totally unexpected. Jamey Jasta from HATEBREED, he invited me to play [SEPULTURA's] 'Refuse/Resist' with HATEBREED earlier in the day. So we all went there. There were so many bands that we knew and stuff. And we were backstage. Then we were talking and stuff, and [KORN bassist] Fieldy said, for some reason, the conversation went, 'Hey, man, would you like to jam 'Roots' tonight?' And he called Derrick, 'Man, let's see what's going on.' And we went backstage and they picked up a guitar, just learning the arrangement, and then we went onstage. Derrick would just start screaming and people went nuts. It was great."

Derrick: "It was incredible to see it afterwards, because they documented everything [on video]."

Andreas: "I was so happy to be part of such a moment. Like, totally unexpected and not planned — no fucking managers or bullshit. Just musicians having a great time backstage. I'm so glad that still exists."