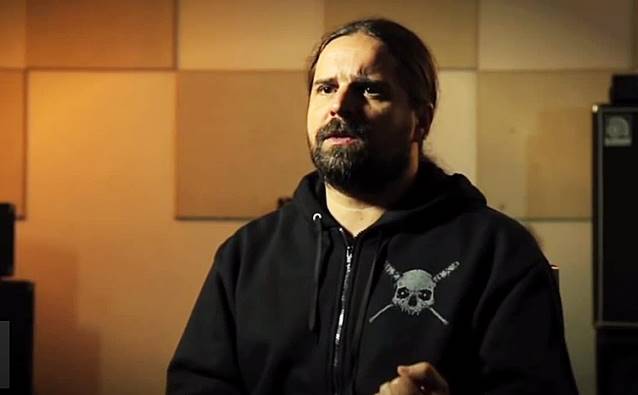 Zisis Petkanas of Greece's Rock Overdose recently conducted an interview with guitarist Andreas Kisser of Brazilian/American metallers SEPULTURA. You can now listen to the chat using the audio player below.

Asked about former SEPULTURA frontman Max Cavalera's recent statement that SEPULTURA without the Cavalera brothers is like MEGADETH without Dave Mustaine, Kisser replied: "I respect any type of opinion."

He continued: "You never know if MEGADETH without Dave Mustaine could happen. It was the same with BLACK SABBATH without Ozzy [Osbourne]. And we saw great BLACK SABBATH stuff [without Ozzy], or VAN HALEN without David Lee Roth. Or [you never know if] LED ZEPPELIN [could have existed] without Robert Plant or something. Some stuff happened, some stuff didn't happen. Anything is possible.

"If you do honest music, if you love what you do, all the rest is just a consequence. I mean, there's so many different [ideas of what] SEPULTURA [shoud be] in different heads around the world and I respect them all. [That's why] we play music from old SEPULTURA to the new stuff.

"I don't see any sense in our playing together again or something. He left the band. It was his choice to leave. He didn't fight for the name. We stayed with SEPULTURA, we kept SEPULTURA together — me, Paulo [Xisto Pinto Jr., bass] and Igor [Cavalera, drums]. [We had to deal with] all the good stuff about SEPULTURA, and all the bad stuff about SEPULTURA, [and we had to work] to rebuild a structure, to find a new manager, to find new producers, to resolve all the chaos that we were at that moment and stuff, and then here we are, celebrating what SEPULTURA is all about, playing music and enjoying what we do, without being slaves of our past.

"[The critics] can say whatever they want. They have an opinion, they have a mouth, they might as well speak up, you know.

"There are so many wishes in the world — there are people that wish so many different things. They can do whatever they want. But that's not gonna change what we believe in, that's very clear and very natural in our hearts and our minds and stuff, and that's why we're still here. And all the rest are just opinions. That's all."

SEPULTURA's new album, "The Mediator Between Head And Hands Must Be The Heart", will be released on October 25 via Nuclear Blast Records.