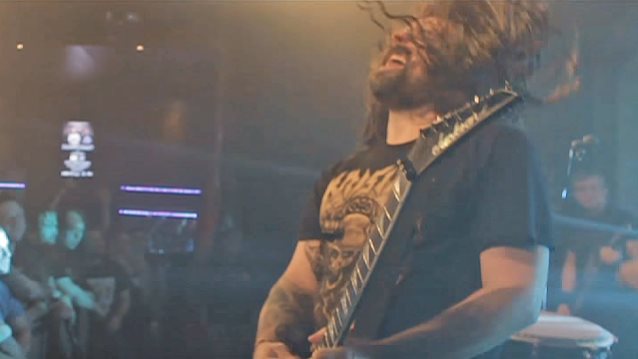 Brazilian/American metallers SEPULTURA released a special EP titled "Under My Skin" last year. The EP's cover was created around images of different tattoos that the band's fans sent in.

To show the band's fan base more about the creation of this release, the second part of the documentary "Sepultura Under My Skin - The Mediator UK Tour 2015", edited and directed by D.O. Blackley (Her Name Is Murder Productions), has been launched. Check it out below.

SEPULTURA played a new song called "I Am The Enemy" during their July 2 appearance at the Rock Al Parque festival at Parque Simón Bolívar in Bogota, Colombia. The track will be featured on the band's new album, due in the coming months via Nuclear Blast. The follow-up to 2013's "The Mediator Between Head And Hands Must Be The Heart" was recorded at at Fascination Street Studios in Örebro, Sweden with Swedish producer Jens Bogren, who has previously worked with OPETH, KREATOR, PARADISE LOST, SOILWORK and AMON AMARTH, among others.

Regarding how SEPULTURA ended up working with Jens Bogren on the new CD, guitarist Andreas Kisser told SVT.se: "We did like a small research on different producers that we didn't work [with] before; we wanted to work with somebody new. And the Swedish music and scene and the bands like MESHUGGAH, OPETH and many others inspired us to come here and to work with him. He also worked with KREATOR, a band from Germany, and ANGRA, another band from Brazil, friends of ours, and I was really impressed with the way he worked [with] both bands."