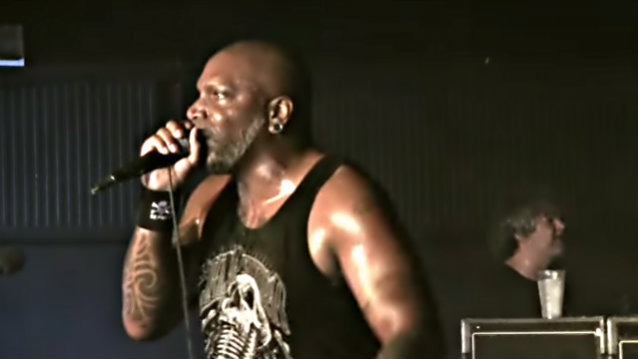 Multi-camera footage of SEPULTURA's June 26 performance at Podium Victorie in Alkmaar, The Netherlands can be seen below.

In a recent interview with MetalObsession.net, SEPULTURA guitarist Andreas Kisser stated about the musical direction of "The Mediator Between The Head And Hands Must Be The Heart": "We wanted to do something more thrashy. Some elements we used to have on older albums — kind of a thrash feeling — with the bands that we used to listen to those days, but a lot of spontaneous stuff too because we practice a lot. We record the practices and lots of the stuff that comes from the practice are from jamming and it might turn out to be a song, etc. But you know, I think the new lineup is the main factor. [There's] new energy, new possibilities on drumming which helped us to write stuff, [and it's] more intense and extreme."

Kisser also spoke about what it was like recording with Robinson again after previousy collaborating with him on 1996's "Roots". "It was really great to have a chance to work with him again," Andreas said. "He's a great friend. We respect each other so much and it was great to go to the States and stay at his home studio, which is a beautiful place. He focuses on the recording 100% and is a very organic producer who gives lots of value for the moment. Even if there are some mistakes here and there, he gives a lot of value for the feeling, for the first expression. [It's] very artistic. It was definitely the right time to be back and working with him again and I'm very happy with the album, for sure."