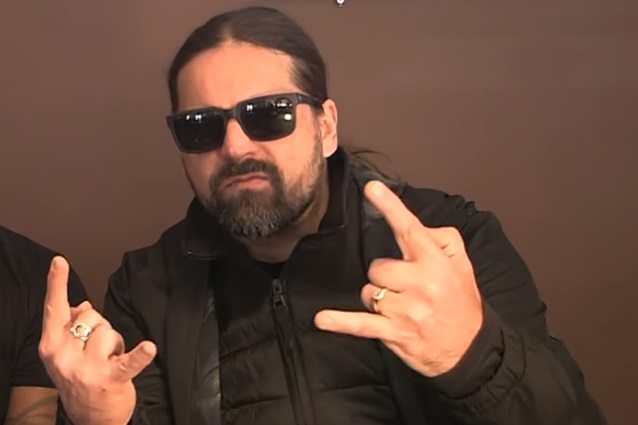 SEPULTURA guitarist Andreas Kisser and vocalist Derrick Green were interviewed by HRH TV at this year's Hammerfest, which was held in March at the Hafan y Mor Holiday Park at Pwllheli, Gwynedd, in North Wales. You can now watch the chat below.

Speaking about the overwhelmingly positive response to SEPULTURA's latest album, "Machine Messiah", Kisser said: "It's an album that was done in a period of our history that we kind of finally rearranged everything. We have a great formation — Eloy [Casagrande, drums] came into the band really to bring this new energy, these new possibilities; he's an amazing drummer. At the same time, we changed management in the last three or four years, we changed the whole structure of the band; we improved that structure. Our relationship with Nuclear Blast is great, so we have a very strong label. We have a fan base that's amazing — almost five million [followers] on Facebook. All over the world, we have the support. 78 countries, 34 years of a career, we went through a lot of different stuff, but finally, it seems that we have everything in place. So we could go in the studio and really focus on music. We didn't have any other bullshit going on. Of course, we always do [laughs], but we have how to deal with that bullshit much better — we're much better prepared. So we go to the studio and really think about music. And me and Derrick, we talk a lot about books and documentaries, stuff that we see on the road. We talk about songtitles and topics that we might use for the future and stuff, and we talk to each other. We're not this type of band that everyone is, like, in one place and they just meet on stage and they don't talk to each other. SEPULTURA was like that a long time ago, and it's not very pleasant and it doesn't bring anything positive or good for the music or for anything. So I think we are living in a magical moment here — really. We respect each other, we have dinner together, which is a great sign. And we can discuss things — heavy things, lighter things — and really move forward. And I think 'Machine Messiah' is the consequence of that — of the whole battle that we have off and on stage."