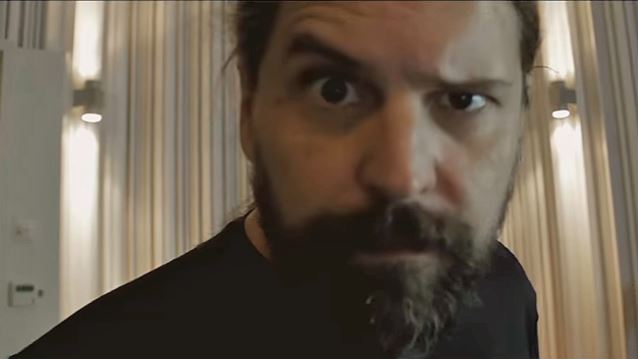 Benjamin Smith of Australia's AMNplify recently conducted an interview with guitarist Andreas Kisser of Brazilian/American metallers SEPULTURA. An excerpt from the chat follows below.

AMNplify: [SEPULTURA's new] album ["Machine Messiah"] has a real theme running through it and focusses on technology and its effects on us as a species. Also, the last album ["The Mediator Between The Hands And The Head Must Be The Heart"] had a similar focus. I remember you saying once that the motivation for that album was that people were becoming robotic, almost as if they were puppets, being used by the technology rather than the other way around. Being that it's a theme featuring so prominently in your work, is it something you're particularly concerned about?

Kisser: "Oh, no doubt about it. I think 'Machine Messiah', rather than be a sci-fi vision for the future, it's what we see today: smartphones, computers, Google glasses, chips under the skin… In many ways, these things are not helping human beings to develop. Instead the robots are doing all these things for us. We are getting lazier and dumber, in a sense. If you go to a concert, for example, you see people filming the concert instead of [enjoying] the moment. Taking footage of things they aren't even going to watch later. Families in the restaurant with their smartphones not even talking to each other. Even to get a woman today you need fucking Tinder. I mean, go to a fucking bar and talk to somebody. All the human interactions are being substituted for this type of robotic ideas. You lose all the meaning of things. I mean, sex is so good because you fight for it; at least in my conception. You go you meet new people, you get feelings and eye contact and all that kind of stuff. And now you just push a button and you go there and you fuck for no reason. It's a very robotic attitude. And it is a concern for all of us, especially for the generation of my children and my grandchildren, whatever, you know. 'Machine Messiah' touches on that subject and tries to find a balance. It's not as if all technology is bad, but we need to find a discipline and keep our human abilities intact and to improve them. There are so many frequencies that we have no understanding of and no connection with; that's the direction we should be going in. In the end, a lot of the technology, it's just trash. Literally, it will all end up rubbish that will destroy our ecology for centuries to come. Why change from iPhone 4 to 5 to 6 or 7? There just seems to be a lot of rhythm that he planet doesn't hold. Fucking robotics and the stress of technology mean we need balance."

AMNplify: And how do you bring that balance to the writing and recording process? Technology plays an increasing role in the production and even the performance of music. How do you find balance in your work?

Kisser: "The real focus for us is to keep the band alive. We are a touring band and always have been. We play festivals and pubs and everything in between. When we go into the studio, our main concern is to capture that feeling that we create when we're onstage. Of course, we use Pro Tools for the editing with the vocals and stuff, and it's much faster and more efficient, but without losing that band feeling. Also, we were working on an album concept. It was not only a single that was released. The album still keeps that magic, organic sound. The organic feeling of building a story, almost like an opera. The sequencing of the songs and that process helped us to maintain that organic feeling of being a musician and to not depend on the machines to play for you. They are there to help with certain things. In the end, you have to perform and play and you have to express yourself through your instrument. We try to do that on every album, because in the end, the album is just a consequence of the stage; it's a collection of songs that you put together to express an idea. But then the songs keep developing on stage; the songs change here and there. They are alive. They are a part of ourselves. That is a very anti-robotic feeling. We're all in the same room, playing the same thing. We are from the old school. We record with tape and cut with tape. We like to keep that knowledge and that skill intact so you can maintain that organic feeling when you are listening to the album."

Read the entire interview at AMNplify.

"Machine Messiah" will be released on January 13 via Nuclear Blast.