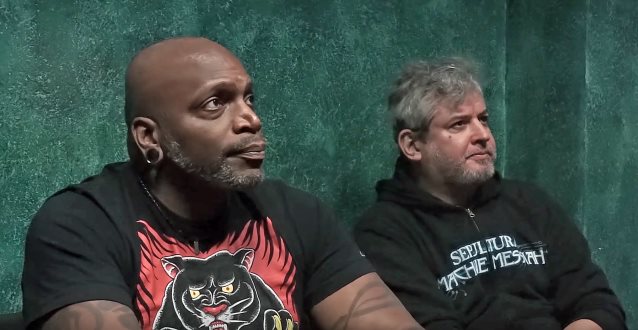 Italy's Rock Rebel Magazine conducted an interview with vocalist Derrick Green and bassist Paulo Xisto Pinto Jr. of Brazilian/American metallers SEPULTURA prior to the band's February 21 concert at Live Music Club in Trezzo D'Adda (Milan), Italy. You can now watch the chat below. A couple of excerpts follow (transcribed by BLABBERMOUTH.NET).

On the lyrical inspiration for SEPULTURA's latest album, "Machine Messiah":

Derrick: "I think the robotization of society actually has been a big influence on the album. The album was written about a lot of things that are happening now. From traveling and playing shows all around the world, we really noticed a lot of things are happening with people, as far as technology, being connected and actually being disconnected with themselves. So it was something that… It's been happening for a while, and it seems like it's getting worse; it's kind of losing this humanity. And so this was something that started the conversation and spread into 'Machine Messiah' — the idea that the second coming type of religion… Not really a religion, but the second coming of, like, a savior, being technology."

On whether they think modern technology has made the world more united or divided:

Derrick: "I think it's definitely split into various parts; I don't think it's so left and right. I believe in technology; I don't wanna go back to the Stone Age. Don't get me wrong — I think it's something that's necessary for the advancement of humanity. But I think we have to really think about what we're creating — what machines are we creating and how it's gonna benefit humanity and stuff, and not a bomb or things created to kill each other, but things… you know, having pure water, having food for everybody. How's this constructive for everybody? The basic elements that humanity needs to survive. I think these [things] should be coming a lot faster than what they are."