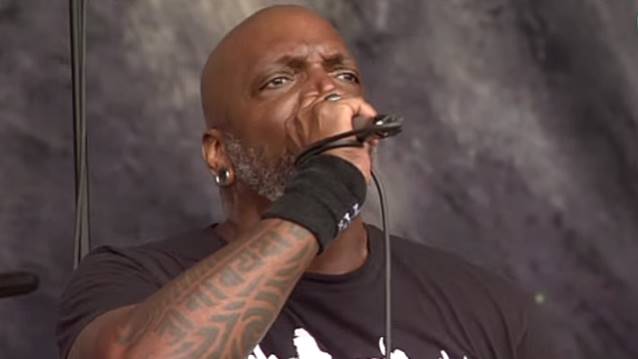 Singer Derrick Green of Brazilian/American metallers SEPULTURA was interviewed on a recent edition of HATEBREED frontman Jamey Jasta's official podcast, "The Jasta Show". You can now listen to the chat using the SoundCloud widget below. A couple of excerpts follow (transcribed by BLABBERMOUTH.NET).

On the constant talk of a hypothetical reunion of SEPULTURA's original lineup, a lot of which has been fueled by the band's former frontman, Max Cavalera (now the leader of SOULFLY):

Derrick: "I think it's great to grab people's attention when you take things out of context or try to creat some type of flow [and generate] controversy. I think the negative energy can go both ways. It can also backfire in your face if you're putting out that negative energy. And I feel that happens most of the time, if not all the time. When you're out there and you're just putting so much crap or shit out there, as far as talking and blah blah blah, then it's definitely gonna come back to hit you in the face. I think, in a way, people believe a lot of things that are being said that are completely ridiculous. It happens in everything, not only in music, but just in media itself, as far as mainstream media. People see it and they go, 'Oh, I believe that, totally,' And it's just not true. Unfortunately, that can have an effect on us, and it has, I think, in the past in certain ways. But at the same time, I remember being young and just 100 percent into hardcore and just, like, 'I don't like any other styles of music.' It was hard for me to open up. I remember, I was at a point where I was talking shit about a band, a local band from Cleveland, or at least someone in the band, and the shit got back to me. It was, really, walking down the street and I saw the dude, and it was just, like, 'Pop!' Like, right in the face. [Laughs] I was, like, 'OK, I'm on the ground now. I should probably just keep my mouth shut.' And I learned a lesson from that. I was, like, 14 or something, 15, and I was just, like, man, you have to be really cautious with what you say, 'cause it can really come back when you least expect it."

On Jasta's belief that the best way to deal with the breakup of the classic SEPULTURA lineup is to support all the projects from the involved parties:

Derrick: "I think there are a lot of people that do do that, in reality. There's people [that go], like, 'I just saw them [SOULFLY or CAVALERA CONSPIRACY] play. I just saw you guys play.' And it's not really a big deal for them. I think those people, actually, are there for the music. They're there to see the band perform and not really make a big deal out of it. But, I mean, it's [the criticism of the current lineup] bound to happen. It was happening when I joined the band and [drummer] Igor [Cavalera] was still in the band. There was still the massive amount of flow of criticism and things like that. There's also, now, the big difference now is there's so many younger people who have never seen SEPULTURA in that time period. And there's people that are just pretending that they've seen them. They're just, like, 'Oh, yeah, I know all this stuff.' I can just tell when there's complete posers who are just trying to fit into a scene and they see that everybody else is saying the same thing, and they kind of wanna join in and not be an outcast. Like, 'What are you talking about? You don't know. I was there.' And it's, like, so what? It's been, what, 16-something years I've been in the band, so there's people who have never seen that formation, the original formation, so for them it's not really that much of a big deal, because that time period has already passed. It's what's happening now that's more important to them."