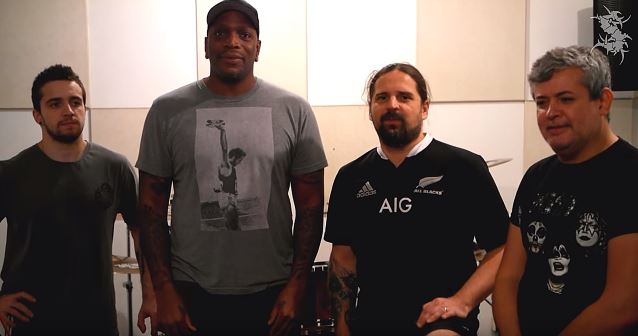 Brazilian/American metallers SEPULTURA have entered Studio Gröndahl in Stockholm, Sweden and Fascination Street Studios in Örebro, Sweden to begin recording their new album for a tentative late 2016 release. Helming the sessions for the follow-up to 2013's "The Mediator Between Head And Hands Must Be The Heart" is Swedish producer Jens Bogren, who has previously worked with OPETH, KREATOR, PARADISE LOST, SOILWORK and AMON AMARTH, among others.

The fourth in a series of webisodes featuring behind-the-scenes footage from the making of SEPULTURA's new album can be seen below.

In a 2013 interview with Metal Assault, SEPULTURA guitarist Andreas Kisser stated about the band's last CD: "Every past SEPULTURA album is definitely an influence on every new album we start working on. Of course, 'Kairos' was the closest one from this, and it was really well received and everything. We did two years of touring in support of it and played great places and great festivals. It was our first album on Nuclear Blast too. So yes, there’s definitely a reference to 'Kairos' on this new album in every aspect, but musically we always try something different because we don't try to reproduce a past album again, you know. But on this one we have influences from the old stuff, more of the death metal type of thing, and I think it's dirtier and more raw than 'Kairos'. I think the main difference is the drummer Eloy Casagrande. This was the first time we worked with him. He has a lot of energy and he has done a lot more metal than our previous drummer Jean Dolabella. I mean, don't get me wrong, Jean is a great musician and drummer. We did 'Kairos' with him and, as we were just saying, 'Kairos' was really well received. But the new drummer is more into the metal world with his background. He's a big SEPULTURA fan and loves playing the style of music. He made a big difference to the sound and inspired us to write what we did."