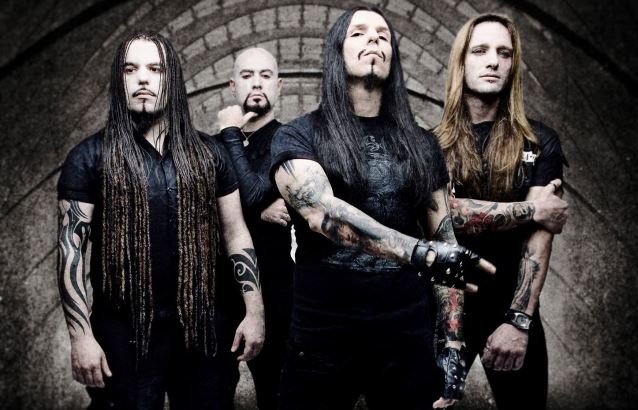 Greek metallers SEPTICFLESH have entered Devasoundz Studios to record 10 new songs for their as-yet-untitled next full-length album for an early 2014 release via Prosthetic Records in North America. The follow-up to 2011's "The Great Mass" is being produced by former MACHINE HEAD and SOULFLY guitarist Logan Mader (CAVALERA CONSPIRACY, FEAR FACTORY, GOJIRA) and will once again include a collaboration with the Prague Philharmonic Orchestra. In addition, the group will also utilize full regular and children's choirs on the CD, which will surely further enhance the epic nature of their music.

SEPTICFLESH has earned extensive international acclaim for its eight albums to date, as well as its live appearances alongside the likes of CRADLE OF FILTH, AMON AMARTH, GORGOROTH, SATYRICON and CHILDREN OF BODOM. The group, which recently headlined the "Conquerers Of The World" North American tour, will take part in next year's 70000 Tons Of Metal cruise.

After the success of the reissues of SEPTICFLESH classics "Mystic Places Of Dawn" (originally out in 1994) and "Esoptron" (1995), Season Of Mist will release a newly remastered version of the Greek demons’ 1997 masterpiece "Ophidian Wheel".

Enhanced with three previously unreleased bonus tracks and a brand new cover artwork designed by SEPTICFLESH frontman Seth Siro Anton himself, the reissue of "Ophidian Wheel" will be available on October 25 (October 29 in North America) on CD and various LP editions.