SENTENCED's posthumous DVD, "Buried Alive", has been certified platinum in the band's native Finland. The disc topped the official Finnish chart upon its release in late 2006.

The former members of SENTENCED were presented with the platinum award for "Buried Alive" on August 14, 2008 at Century Media Records' 20th-anniversary party at the Tavastia club in Helsinki where ex-SENTENCED singer Ville Laihiala's new band, POISONBLACK, and labelmates NORTHER and KIVIMETSÄN DRUIDI performed.

Photos from the award presentation can be viewed below.

An e-card for "Buried Alive" DVD, which captures the Finnish band's final performance in their hometown of Oulu, Finland on October 1, 2005, can be accessed at this location. The e-card features a full mock-up of the DVD menu and a taste of "Buried Alive", including one full live song as well as snippets from all chapters. 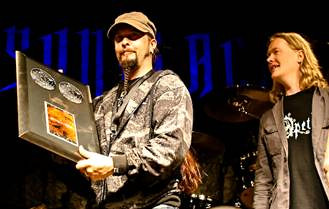 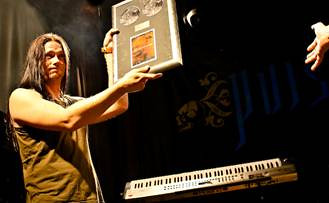