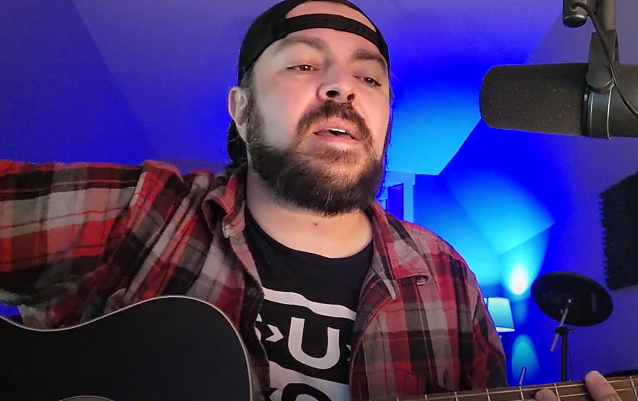 SEETHER frontman Shaun Morgan recently performed acoustic versions of a couple of the band's songs — "Fine Again" and "Bruised And Bloodied" — for listeners of the Detroit's WRIF radio station. Check out video below.

"Bruised And Bloodied" is taken from SEETHER's latest album, "Si Vis Pacem, Para Bellum" ("If You Want Peace, Prepare For War"), which debuted at No. 2 on Billboard's Hard Rock chart upon its release last year.

Morgan previously stated about the track: "'Bruised And Bloodied' is a mix of self-deprecation and rage, neatly wrapped up in a sexy groove with a big shiny pop bow on top. Essentially, it is a combination of shame and sadness delivered in a cheerful way, as I've always enjoyed juxtaposing jaded lyrics with a jubilant melody."

"Bruised And Bloodied", the second single released from "Si Vis Pacem, Para Bellum", follows "Dangerous", which topped rock radio for three consecutive weeks last fall. In between, the band shared videos for two fan-favorite album tracks "Beg" and "Wasteland". Additionally, SEETHER has been highlighting tracks from its multi-platinum-selling catalog with a series of virtual acoustic performance videos via its YouTube channel.

To celebrate its 20th anniversary, SEETHER released three of its classic albums — "Disclaimer II", "Karma And Effect" and "Finding Beauty In Negative Spaces" — on vinyl for the very first time in November via Craft Recordings. Released early in the band's remarkable run, these three albums exemplify the distinctive musicianship and songcraft for which SEETHER is best known and helped solidify them as one of the most successful hard rock bands in the world.

Since forming in Pretoria, South Africa in 1999, SEETHER has amassed a global fan base that has grown organically with the quartet's sense of purpose and commitment spreading outwards, offering their fans around the world camaraderie, comfort and a sense of personal power. While others of their ilk faded away, SEETHER maintains a strong sense of self, ignoring trends and critics in favor of a consummate devotion to their craft. Their impressive sales and chart history includes three platinum and two gold albums, 16 No. 1 singles (including 2017's "Let You Down", 2014's "Words As Weapons" and 2011's "Tonight"); 20 Top 5 multi-format hits, with U.S. singles sales topping 17 million and over 1.5 billion streams worldwide across all platforms.