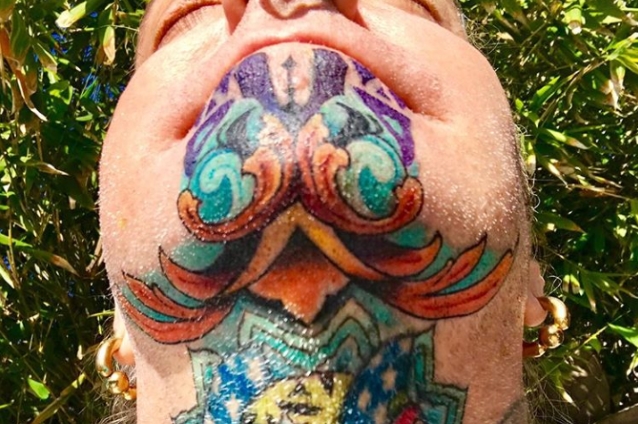 This past weekend, DEVILDRIVER frontman Dez Fafara had his neck and chin tattoos touched up, along with getting some additional ink done, at the Fallen Crow Tattoo Company in Murrieta, California. You can see the before and after photos of Fafara in his two separate Instagram posts below.

Last year, Fafara told Loudwire that he ran away from home at age 15 after receiving his first tattoo — a wolf on his right shoulder. "I was in a psychobilly band called the SCREAMIN’ WOLVES. I was a stand-up drummer," he said. "I was going to a Baptist school at the time and [my mom] pulled the covers off me, told me it was time to go to school and saw that, and that was it. I had to run away from home and I left a horrible fucking situation because of that tattoo."

DEVILDRIVER recently completed recording its new album with producer Steve Evetts (EVERY TIME I DIE, THE DILLINGER ESCAPE PLAN). The follow-up to 2016's "Trust No One" is tentatively due later in the year via Napalm Records.

Last year, Fafara told Metal Wani that DEVILDRIVER had written 48 songs for what was planned to be a staggered-release double album. He went on to say that the next DEVILDRIVER LP would be "the record of our career. This will be record that other artists judge us, as well as themselves, on once they hear this," he claimed.