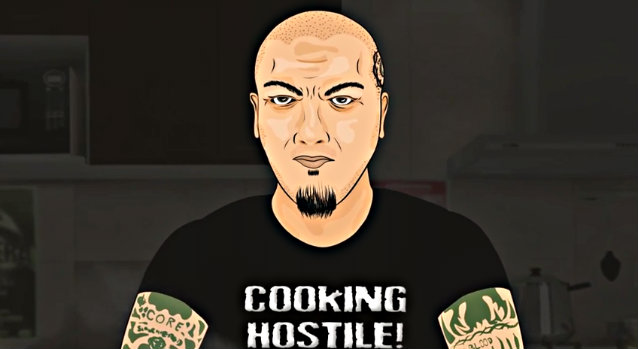 The second episode of "Cooking Hostile" — the newly launched animated series based on a completely off-the-wall premise: PANTERA frontman Philip Anselmo hosting his own cooking show — can be seen below. The program takes snippets of some of PANTERA's best-known songs and changes the lyrics to ones that are more cooking-centric.

"Cooking Hostile" is the brainchild of Gainesville, Florida's Joey Siler, who also fronts the PANTERA tribute band GOOD FRIENDS & A BOTTLE OF WHISKEY.

Asked how he came up with the idea to do "Cooking Hostile", Siler told Vanyaland: "I was just joking around at band practice after we got done jamming '5 Minutes Alone' and I told the guys, 'What if Phil had his own cooking show and I changed the lyrics to '5 Minutes On Low?'' Everyone got a good laugh out of it. It was nothing more than a joke, but I had recently got into doing animation as a hobby at the beginning of this year and had messed around with making a few animations and decided to come up with some ideas for the 'Cooking Hostile With Phil Anselmo' [two-and-half-minute short] video. During the next week, I picked a few PANTERA songs and worked on changing the lyrics up and showed the guys and they thought it was hilarious, so we laid down the tracks and I started working on the animation. The whole project was probably done in about four weeks."

Regarding the process of creating the first "Cooking Hostile" 10-minute episode, Siler said: "I can tell you I have much more respect for people that work in animation after working on this project. It's very time consuming, and I have real job with a 40-hour work week, so it all had to be done in my spare time. That's the main reason it has taken so long. After I saw the interest in the first one, I decided to take a lot more time on the next one and make it the best I could for what I have to work with. As for the process, I start with writing out the lyrics to the song I want to parody first and then record the music and vocals. Then I usually sketch out the scene to give me a general idea to help with the animation process."

Anselmo reportedly told an interviewer that the found the original two-and-half-minute "Cooking Hostile With Phil Anselmo" short — which has received more than half a million views on YouTube so far — "fucking hilarious, fucking fantastic," and gave it "two big thumbs up." In addition, the short was shown in October at Anselmo's Housecore Horror Film Festival in Austin, Texas.

"It was just great to hear he wasn't suing us!" laughed Siler. "But really, Phil seems to have a great sense of humor and it was awesome to just to know he had seen it and got a good laugh out of it. We couldn't have asked for a better response."

He added: "Corey Mitchell, who created the [Housecore Horror Film Festival] with Phil, actually contacted me on YouTube asking me if I would be interested in allowing the original short for Phil and his film festival. I'm honored to be a part of it." 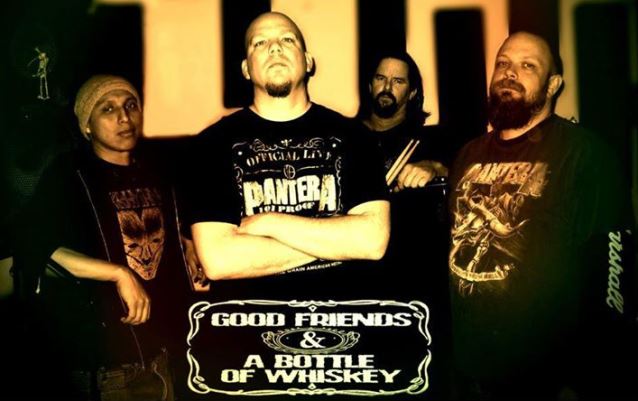